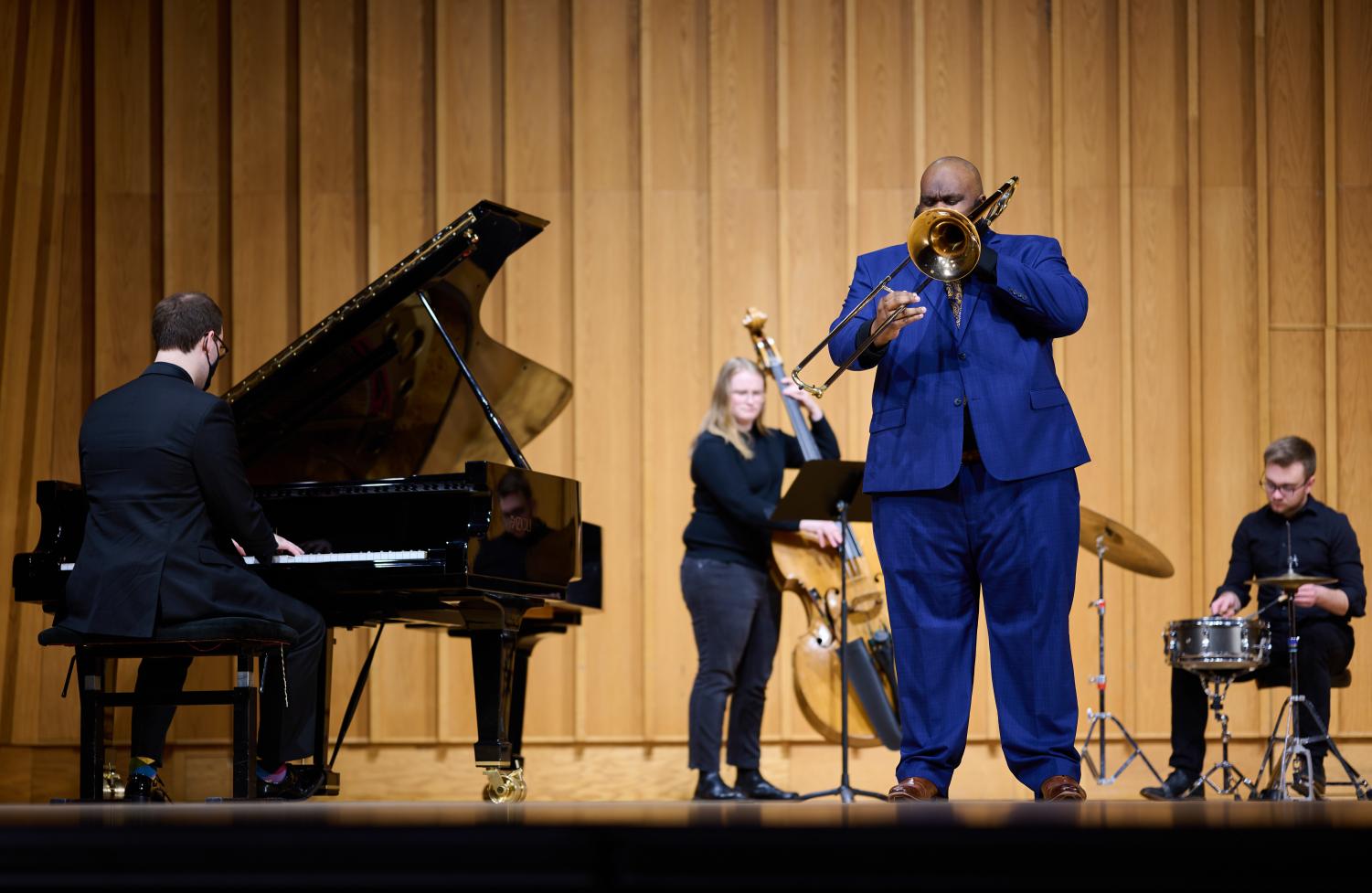 DeKALB — NIU President Lisa Freeman kicked off Friday’s benefit concert in Ukraine with a speech about people coming together to support communities overseas before presenting the first performance of the evening.

The concert was hosted by the NIU School of Music and hosted by NIU graduate students Jennalynn Cisna and Annie Chung. A crowd of approximately 75 attendees watched faculty and students show off their talents for a cause.

The concert was free, but the School of Music asked for donations from four aid organizations: Mercy Corps, the United Nations High Commissioner for Refugees, Direct Relief and Save the Children.

Carl and Robyn Menk, residents of Le Sueur, Minnesota, had previously attended Megan Rault and Greg Comonal’s saxophone/guitar recital that took place earlier Friday to watch their son Austyn Menk perform. Austyn, a technician, lab, supervisor and assistant at the NIU, was also performing in the benefit concert, so Carl and Robyn stayed on for both.

Carl was thrilled to attend the concert not only to support his son, but also because the concert was truly diverse and dealt with a heavy topic.

“Hopefully he can explain the inexplicable,” Carl said. His wife Robyn echoed that statement.

The first performance was conducted by Chung and a collaboration of strings and winds performed the Ukrainian national anthem, United Armed Forces Edition.

The Ukrainian national anthem kicked off the musical performances. Cisna said she wanted to get a group of artists together to play the national anthem and Chung to lead, but then they turned it into something bigger. It took them about four weeks and most of spring break trying to plan and organize the gig.

“We set up Google forms for people to fill in and found that many musicians and teachers were happy to sign up,” Chung said.

Cisna and Chung said they hope the concert will raise awareness and show people’s diversity through the gift of music.

Most of the performances were Ukrainian songs and anthems, there were a few that deviated but retained the general theme of the concert. The performers played each song with grace, precision and skill.

Music teacher Gregory Beyer performed two songs using a Berimbau, a musical bow that originated in Africa but is now commonly used in Brazil. Beyer also sang in Portuguese for her second performance.

Before performing Horace Silver’s “Peace,” graduate teaching assistant and trombone player Kirby Fellis spoke about how heartbreaking it was to see the violence and racism against black people in Ukraine.

The concert ended with Bryan A. Flippin, graduate assistant of the band Huskie, leading the “Prayer for Ukraine”. The performers were greeted with a standing ovation from the crowd as organizers, conductors and musicians saluted the evening.

Montez Soliz, a young political science student, couldn’t choose his favorite moment from the concert because he found it moving and was moved by it all.

“Since COVID arrived, it’s been hard to come together, but it’s brought people together for a good cause,” Soliz said.