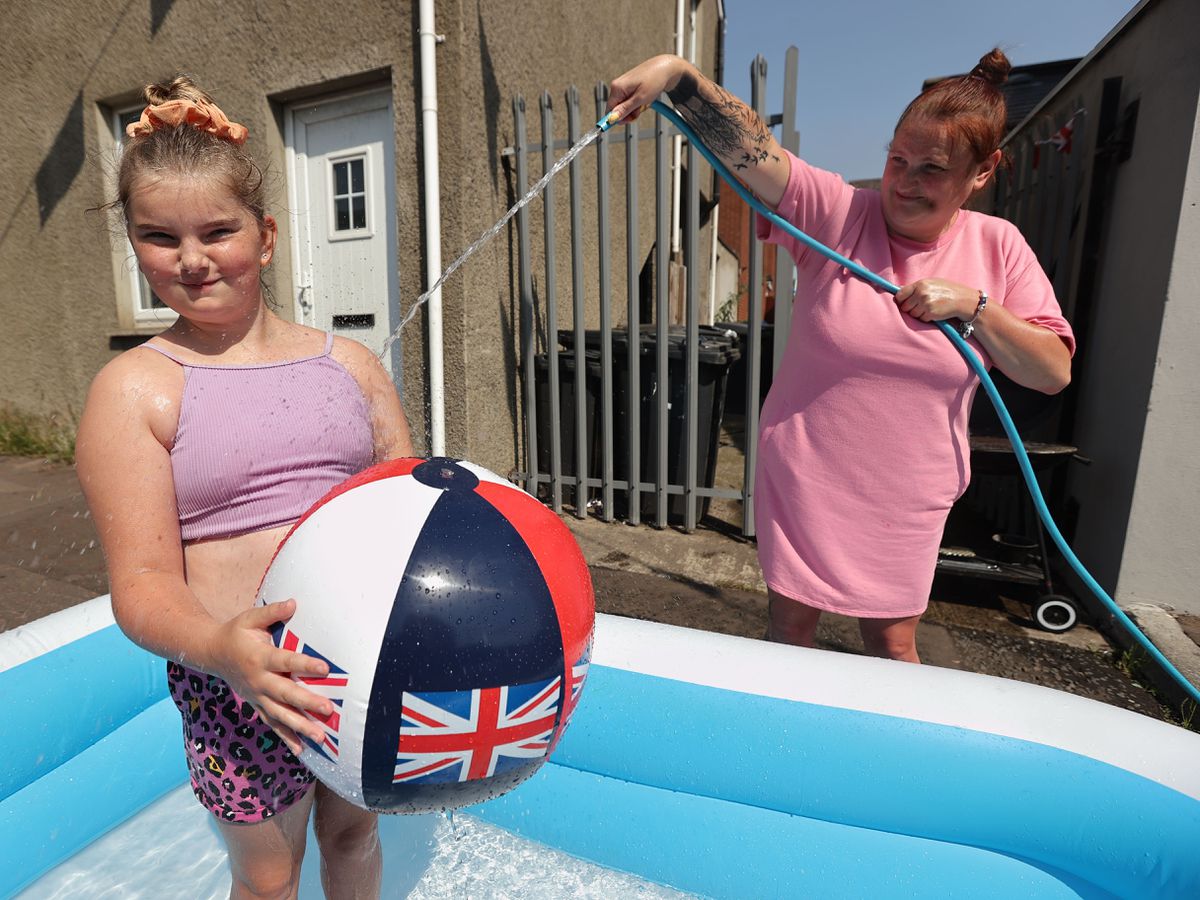 Northern Ireland recorded its hottest day of the year, with temperatures exceeding 30°C in some areas.

People have been advised to stay out of the sun, although there is no heat warning in place for the area.

In the Republic of Ireland, a yellow weather alert is in place and red and amber weather alerts for extreme heat have been issued across Britain.

The Met Office said as of 4pm a temperature of 30.5C was recorded in Armagh and 30.4C in Derrylin in County Fermanagh.

The highest temperature on record in Northern Ireland was 31.3C (88.3F) at Castlederg in County Tyrone last July.

As people flocked to beaches in Northern Ireland, public transport operator Translink announced that train tickets to popular Helen’s Bay in Co Down were suspended.

Dr. Brid Farrell, deputy director of public health at the PHA, urged people to stay out of the sun during the hottest hours.

She told the BBC Good Morning Ulster programme: ‘What we recommend is that people try to stay in cool areas or stay cool by drinking plenty of fluids.

“In particular, we would like people to avoid being outside between 11 a.m. and 3 p.m.

“Stay out of the sun, use sunscreen.

“In fact, we are lucky not to reach the temperatures currently seen in England, Wales and southern Scotland.

“Extreme temperatures can affect older people and young children more severely, so everyone should be careful of them.”

Dr Farrell added: “We are going to experience more extreme weather conditions, both very hot and very cold over the next two decades.

“All of this is due to climate change.

“It’s something we have to prepare for and be prepared for and know what to do when the temperatures reach very high levels.

“I think for the next 48 hours we should be able to manage and the health services will be fine, but for the future it will become a problem.”

Lifeboat and lifeguard services should be busy with families heading to the beach to try and stay cool in the sun.

Carl Kennedy of the RNLI told the BBC: “We expect today to be quite a busy day for our rescuers.

“We have wall to wall sun and there will be a lot of families coming to the beach today.

“The priority for lifeguards is on people in the water, so we will keep an eye out for people and children playing around the water.”

The RNLI lifeboat crew rescued five adults and four children off the coast of Co Antrim on Sunday after their boat struck a submerged object and began to take on water.

The group was taken to Ballycastle Harbor where they were assisted by coastguards.

Health services are also expected to be stretched during the heatwave, with the public advised to call an ambulance only in an emergency.

The Northern Ireland Ambulance Service said it expected an increase in the number of less urgent calls it receives through the 999 system.

A spokesperson said: “To help us protect the most vulnerable, we would ask the public to call only in an emergency, but please feel free to do so if necessary.”

Animal welfare charity the USPCA has issued a weather warning to pet owners.

USPCA Development Manager Colleen Tinnelly said, “It’s crucial that your pet has access to a shaded resting area and a constant supply of clean, fresh water – your pet’s water bowl should be refilled regularly with cooler water or ice cubes during the day. .

“You can also freeze treats for your pet, like carrot or apple bites, chopped watermelon and banana, or peanut butter that can be placed inside toys and give them a boost. great enrichment.

“It can be very tempting to take our dogs with us on walks or family outings, but it can be very dangerous for them.

“One of the most important pieces of advice we can give to members of the public is to never leave them in a car.”