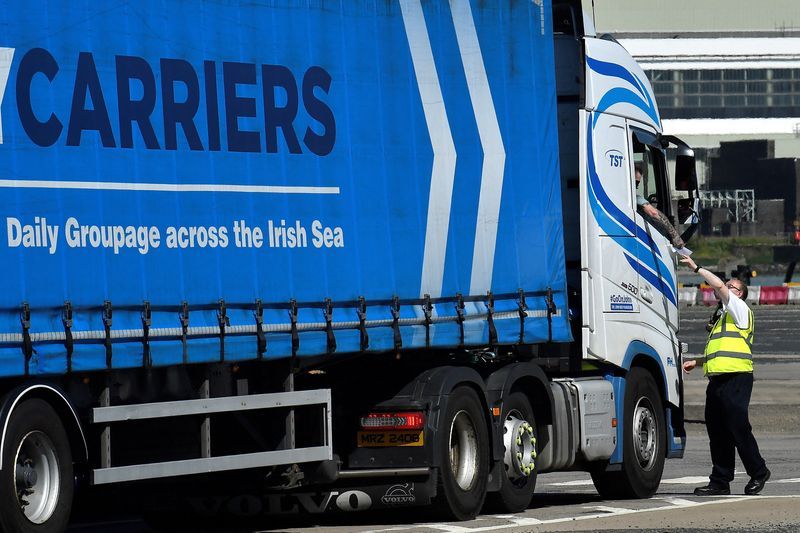 BELFAST (Reuters) – A growing majority of voters in Northern Ireland support the region’s post-Brexit trade rules, large parts of which the British government is currently set to scrap, according to a survey published on Wednesday.

Under the Northern Ireland Protocol, the British-ruled region effectively remained in the EU’s single goods market as the rest of the UK left last year, necessitating checks on certain goods from Great Britain.

The proportion of voters who think the protocol is the most appropriate way to deal with the impact of Britain’s departure from the EU has risen from 50% in February to 55%, according to the regular poll conducted for the ‘Queen’s University Belfast.

It hit a previous high of 53% last October and stood at 46% when voters were first polled in April 2021.

Britain has pledged to roll back parts of the bespoke deal it struck with the EU if it fails to convince Brussels to remove controls and the legislation allowing it to do so passed on Monday the first of many parliamentary tests.

Wednesday’s poll showed most people oppose unilateral action from London and 74% think a negotiated settlement between the UK and EU on easing some trade barriers is preferable.

The survey also showed that the UK government is by far the most distrustful of the 10 groups voters were asked to rate their ability to manage Northern Ireland interests.

Only 4% trust Prime Minister Boris Johnson’s government and 84% say they are wary of it. Voters in Northern Ireland are slightly more likely to trust (47%) than distrust (43%) the European Commission.

“Many voters in Northern Ireland clearly continue to have genuine concerns about what the full working of the protocol would mean,” said Professor David Phinnemore, one of the project’s researchers, pointing to the 55% who are concerned about the protocol as it currently stands. be fully implemented.

“Yet this latest poll also shows that support for the protocol is on the rise and nearly two-thirds of respondents see it as economic opportunity.”

The survey was conducted June 3-6 with a weighted sample of 1,497 respondents.