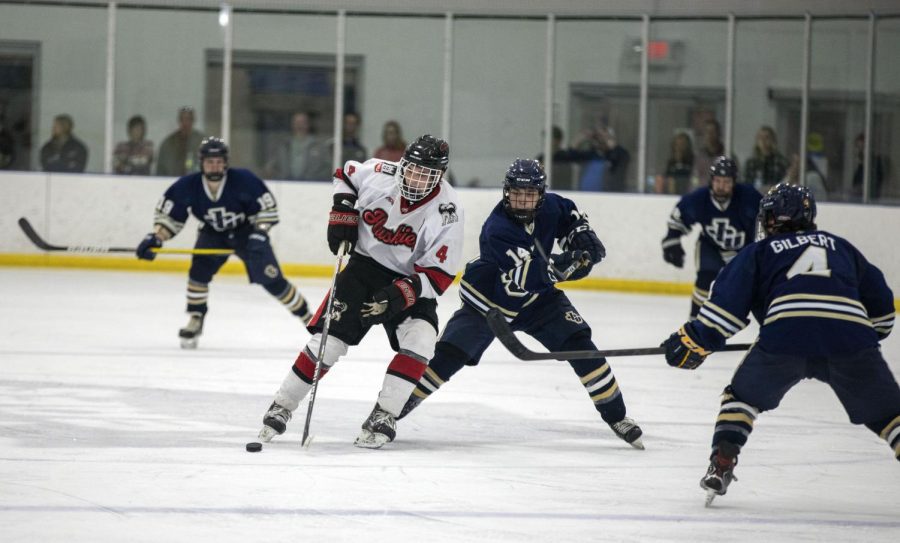 Sophomore defenseman Keaton Peters is looking to build on his early success rebuilding a Huskies hockey program in his second season with NIU’s Division I hockey team.

Hailing from Quad Cities, Iowa, Peters was on the ice before he was on the schoolyard. His journey to the rink is rooted in his family’s involvement in the sport.

“I started skating when I was two, and I started trying to use a stick and a puck and everything around four,” Peters said. “I got into it very early on because my brother always played and my parents always watched. My brother was the first in the family to play, and then it kind of continued for me.

Peters’ talent during his three seasons playing high school hockey in Iowa allowed him to play two seasons of junior hockey from 2019-2021 with the Peoria Mustangs of the North American 3 Hockey League.

NIU contacted Peters during his sophomore year at Peoria. Peters found his way to Huskies country despite offers from other schools. After seeing what Huskie hockey was like, Peters moved from Peoria to DeKalb.

“I was talking to other schools, but the old coaching staff contacted me and contacted me,” Peters said. “I had a visit and really liked it. I decided this would be a good fit.

A Unique Piece in the NIU Puzzle

Peters sees himself as a defenseman who is always looking to make an impact anywhere on the ice.

“Rushing for the puck and trying to be a point guard,” Peters said of his style of play. “Trying to be involved on offense while also doing my job on the defensive end.”

He’s not the most active among the boys, but he leads by example. That’s what sets it apart. »

As this is his second season with the Huskies, Peters is getting used to first-year head coach Brad Stoffers, who praised Peters as a rare type of defenseman who plays an up-to-date brand of hockey.

“The hardest piece to find is really a good defender,” Stoffers said. “What we’re trying to do is play a modern style, where the defenders get involved offensively. They play 200 feet, they can handle the puck and can skate well… he’s made for us. He (Peters) can get involved. He’s a good defenseman, but he can also handle the puck and make offensive plays. He plays this modern-style two-way defender.

Peters’ impact on the ice isn’t just felt at even strength. Leading forward and team captain Rodahn Evans believes Peters’ offensive presence and past experience have taken this season’s best power-play unit to a new level.

“He (Peters) took the lead of our players on the power play,” Evans said. “The guy at the top. The quarterback. Last year he was trying to figure out the position and buy it on PP (power play) two. This year he has really improved his passing abilities.

A mentor for the Huskies’ new guard

Not only is Peters an impactful player, but also an impactful leader. As second-year assistant captain, Peters wants to set an example for the young players on the team.

“I try to lead by example,” Peters said. “Just show the younger kids what you need to do every day to improve.”

Evans spoke highly of Peters’ ability to be an impactful leader without being the loudest in the room.

Peters’ leadership style applies not just to the on-ice aspect, but to all aspects of being a Division I hockey player. Whether it’s coaching, skate conditioning, or training off the ice, Peters always exceeds the standard that Stoffers sets for his players.

From battle to bond

Evans and Peters know that when things don’t go well on the ice, frustration boils over. As leaders, they are responsible for holding themselves and their teammates accountable. Both players detailed a time when training didn’t meet their standards, so they argued. Ironically, he showed a sign of respect and formed a bond between them.

“Make everything more intense,” Peters said of the fight. “You want practices to be more intense and everyone to do the right things and work harder.”

Despite the calm nature of Peters’ leadership, he sets a high standard for what a Division I varsity athlete should strive to be.

Peters and the Huskies will look to put their first win on the board at 7:30 p.m. Friday when they take on Purdue Northwest University Pride at Canlan Ice Sports in West Dundee.