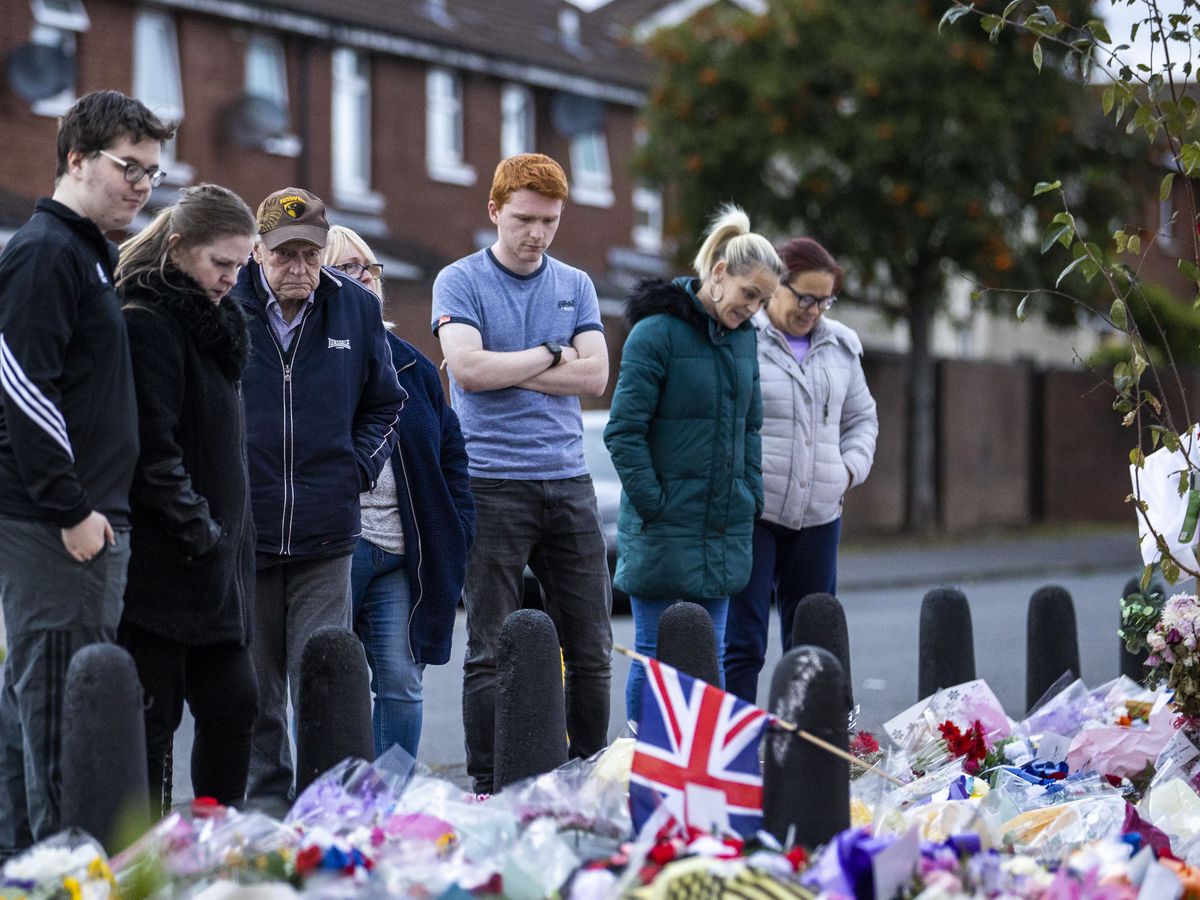 People gathered in homes, parks and civic buildings across Northern Ireland to attend the Queen’s funeral.

Large screens were brought in to broadcast live the funeral procession and service at Westminster Abbey, which started at 11 a.m.

Hundreds of people gathered at Belfast City Hall for the funeral, while around 200 people watched the funeral live on the lawn of St Malachy’s Church in Hillsborough.

Belfast City Hall and other venues across Northern Ireland have installed large screens so people can gather to watch the state funeral together.

Coleraine Town Hall broadcast the proceedings from 8am, while People’s Park in Ballymena and Shaftesbury Park in Carrickfergus broadcast the event from 9.30am.

Christ Church Presbyterian Church in Dundonald, on the outskirts of Belfast, presents the funeral on a big screen to members of its congregation.

Copies of the Order of Service were handed out on arrival with tea and biscuits also offered to those who gathered to witness the historic event.

Church pastor Reverend Richard McIlhatton said there was a real sense of loss within the local community.

“It’s an opportunity to come together because some people would feel quite isolated and alone in their own homes,” he said.

“Coming together and being part of something bigger – we wanted to give people the opportunity to be part of it.”

Leanne Rodgers said: “Growing up in New Zealand, the Queen is all I’ve ever known. We’ll never see her like this again, in terms of longevity. It’s a very sad day.

Joy Rodgers, from Lisburn, traveled to Hillsborough in County Down to attend the funeral with her daughter-in-law Leanne Rodgers, from New Zealand.

Joy Rodgers said: “When I was young I remember the Queen coming to Lisburn.

“I wanted to come to Hillsborough today to show my respects, it’s a once in a lifetime experience.

“The Queen was 96 and I guess it was her time, but it’s a big challenge now for Charles.”

Hundreds of foreign dignitaries and charity representatives are among those who have joined the royal family in the abbey for the service.

Peter Sheridan of Co-operation Ireland, which is among the charities of which the late Queen was a patron, said he was honored to attend the funeral and reflected on the Queen’s “healing gestures”.

At 8pm on Sunday evening, a minute’s silence was observed in places across Northern Ireland to mourn the Queen’s death and reflect on her life and legacy.

People across the UK have been invited to mark the occasion in their homes or at community events.

At Hillsborough Castle, the royal residence of Northern Ireland, a gong sounded at the start of the minute’s silence, prompting the crowd gathered at the castle gates to lower their heads.

Robin Campbell, from Royal Hillsborough, said he came to the castle on Sunday evening ‘to join the rest of the nation in the minute’s silence for Her Majesty The Queen, to remember her’.

He said he would attend the funeral with his family.

“The plan is to spend it with my family, my mum and dad, my partner and our kids. It’s a family occasion.

“It’s such a historic, sad but also celebratory event in that it also left us with a great legacy to follow.”

In Belfast, people gathered in the West Belfast Orange Hall Memorial Garden ahead of the minute’s silence.

William Humphrey, chairman of the hall committee and former member of the Northern Ireland Assembly, told those gathered that the Queen was respected “not just as a monarch, but as a wife of international state”.

“I think it’s fair to say that for all of us, and that’s across the country, the death of the Queen was like the death of a member of our own family, and I think that pays tribute to the way she was loved in every household in the kingdom. ”

The funeral comes nearly a week after the king’s first visit to Northern Ireland as Britain’s new head of state.

Charles met politicians at Hillsborough Castle before he and the Queen Consort attended a memorial service for the Queen at St Anne’s Cathedral, Belfast.

Charles and Camilla also greeted some members of the public who had gathered to catch a glimpse of the new monarch and convey their condolences on the loss of his mother.