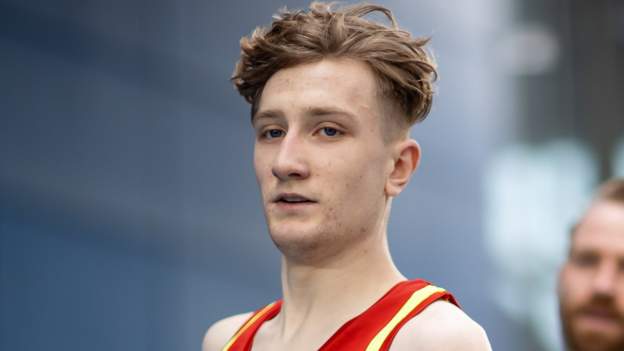 Northern Ireland and Ulster Championships: Griggs leads in the 800m by Purcell

Tyrone teenager Nick Griggs had to settle for second in the 800m at the Northern Ireland Championships as Meath man Harry Purcell took the win.

In a championship that won’t be long remembered, the battle between Purcell and young star Griggs was a rare topic of conversation.

A graduate of Villanova University, Purcell, 26, showed his 800m running experience as he controlled the race, but Griggs, who set a new European indoor mile record under 20 year old with a remarkable time of 3:56.40 in March, probably won’t be discouraged after going downhill. from his usual distances to challenge the athlete from Dunshaughlin.

But while the youngster from Newmills is certainly more of a 1500m/5000m type athlete, he will surely break 1:50 for 800m when he finds himself in much stronger fields than he had to face on Saturday.

Griggs’ next scheduled outing is the Morton Games in Dublin on July 2 before racing at Cork City Sport three days later as he continues his preparations towards the Under-20 World Championships in Colombia in early August.

While Megan Marrs opted out of the championships, heptathlete Kate O’Connor was the only potential Commonwealth Games athlete from Northern Ireland in action.

In Marrs’ absence, the Dundalk athlete won the women’s 100m hurdles in 13.96 seconds – 0.02 seconds short of her personal best.

Paralympic great Jason Smyth finished third in the men’s 100m in 10.66 seconds as Portstewart Dominican schoolboy Oliver Swinney, who had just recently won the Irish Schools title, took the win in 10.48 – 0 .01 off his personal best last month – with Clonliffe’s Leo Morgan. [10.64] also finishing ahead of the Eglinton man.

But overall the level of competition was a far cry from the peak of the Northern Ireland and Ulster Championships, the less said about the depth and quality of certain events the better.