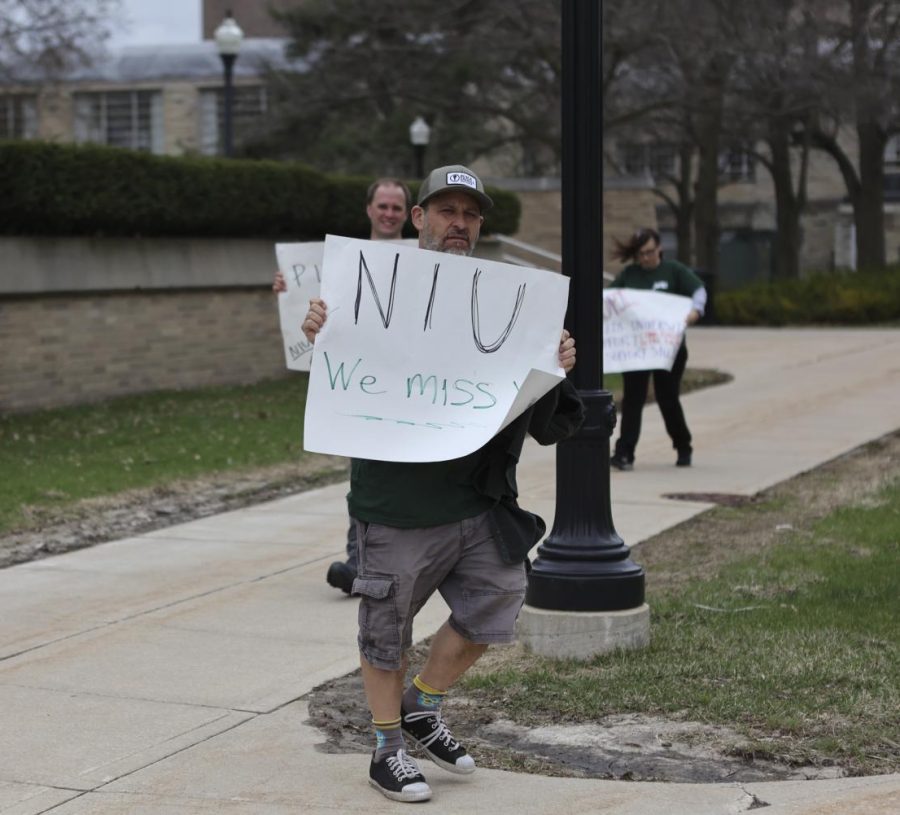 Non-tenured NIU English instructor Dan Libman walks with a sign reading ‘NIU we miss you’ during Wednesday’s IFT and UPI information picket outside Altgeld Lobby. Libman has been an instructor since 1998 and said he has never seen the university walk away from the negotiating table until this round. (Wes Sanderson | North Star)

Educators are the backbone of any university. They are faces that students often interact with and who bear the greatest responsibility for teaching the next generation of the workforce. NIU tenured and non-tenured faculty are the faces that make up this cohort of on-campus teachers.

Members of Illinois University Professionals Local 4100 have been in ongoing collective bargaining talks for non-permanent faculty contracts since June 2021. Most recently, the United Faculty Alliance prepared to begin bargaining its own contract.

Those plans have since stalled when the university’s negotiating team pulled out after UPI invited UFA members to the talks, which was “against common practice,” according to one. UNI statement.

While inviting UFA members may not be “common practice,” Kerry Ferris, UFA chapter president, said it’s not a rule of thumb.

“It’s not written,” Ferris said. “There are no ground rules for UFA negotiations. That means there are no rules that say we can’t bring certain people to the table.

Keith Nyquist, president of the UPI Labor Local, also said there were no established ground rules for non-permanent bargaining either.

The Northern Star editorial board believes that the failure of these negotiations would harm not only the members of the two unions, but also the students of NIU.

“The key job (of the instructors) here is to serve the students,” Nyquist said. “Our advantage for the students and the university is that we are agents of retention. We focus entirely on the students in the classroom.

UPI and UFA made the decision to bring members of the opposing union into negotiations because the two have a common interest and a similar responsibility to the campus.

“The purpose of unions is to create people power,” Ferris said. “We are sister locals to UPI Local 4100 and we both have an idea of ​​how best to serve our unions.”

The Northern Star Editorial Board agrees with Ferris and Nyquist’s arguments and strongly encourages NIU and its negotiating team to return to the table.