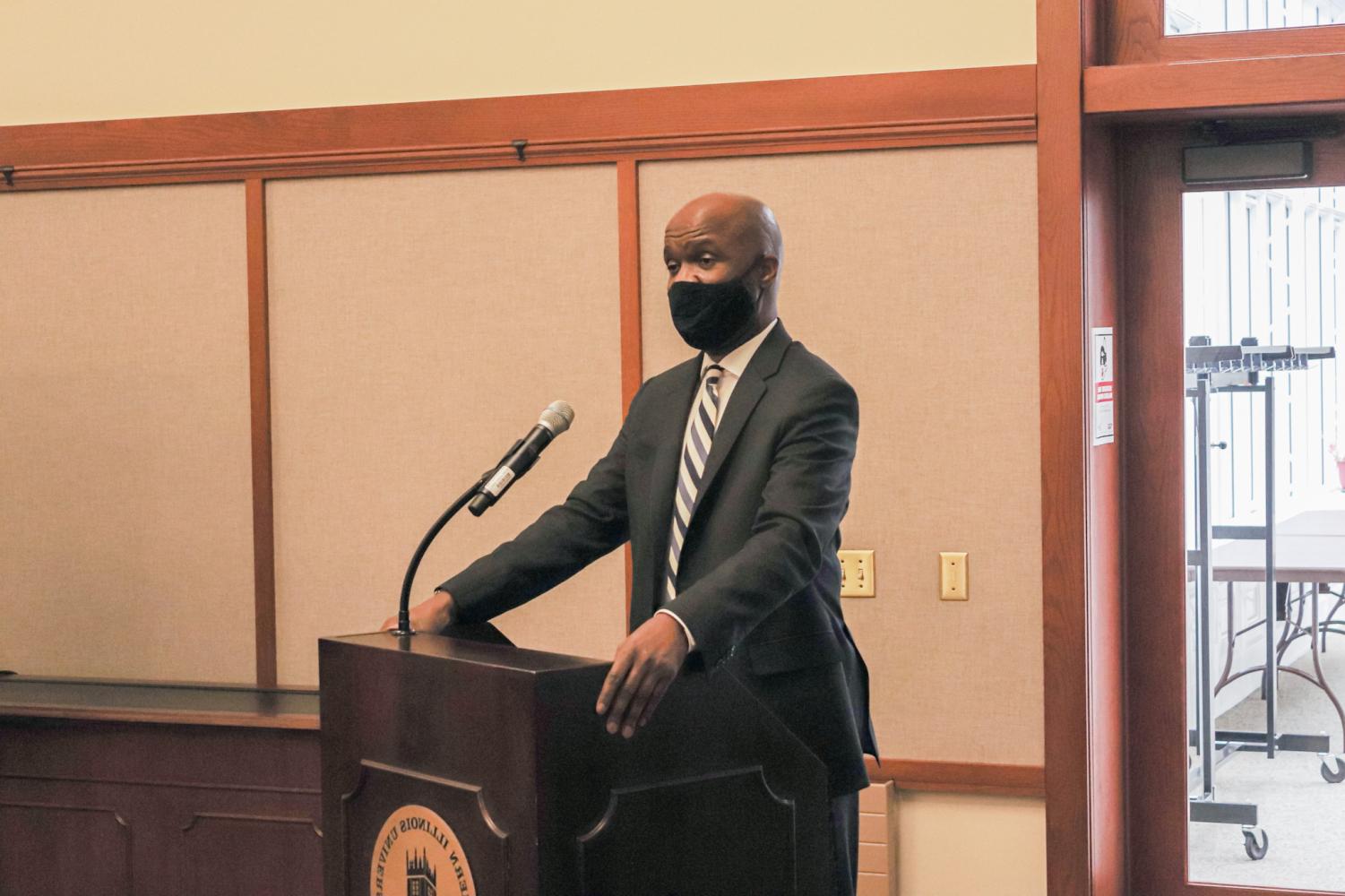 Acting Police Chief Darren Mitchell lays out his plan for the department if he is chosen to lead.

NIU Acting Chief of Police Darren Mitchell spoke as the first candidate in a series of open forums. Mitchell has made it a priority to build a better sense of trust between students and campus police. (Abigail Norton | North Star)

FromKALB – NIU Acting Chief of Police Darren Mitchell outlined his goals to increase campus security and build trust with the NIU community if selected as the next permanent NIU Chief of Police during a forum open Monday.

Mitchell has served as the NIU’s acting police chief since mid-April, when the former NIU police chief Tom Phillips retirement.

Some of these goals include making efforts to communicate with students and making the department available to students in non-emergency situations.

“We want to create spaces where students feel like they can meet and greet us, and that’s not a crisis situation,” Mitchell said. “So we can literally sit down and meet and do things like coffee with a cop or pizza with a cop. These are great ways to establish connection and dialogue.

A familiar face on campus, Mitchell has been a member of the NIU community well beyond his 21 years with the NIU Police Department.

“I’ve been on campus and in the community for about 30 years,” Mitchell said. “I got my undergrad and my masters at NIU. I have served with the NIU Police Department for 21 years and the University for 26 years.

Building trust with the community

As an officer and now as a potential future police chief, Mitchell has made it a priority to build a better sense of trust between students and campus police. One of the ways Mitchell would do this would be to reinstate community safety centers and have officers available to engage with the community.

“Relationship building is always important,” Mitchell said. “I think it’s incumbent on the police to extend the olive branch and try to build relationships.”

Mitchell focused on the importance of communication with the NIU community to ensure their needs are met in order to establish a sense of trust.

“It also depends on what you (the NIU community) think we can do,” Mitchell said. “If you want to get together and talk about ideas, initiatives, I’m all ears. I am a non-traditional progressive police chief who wants to be flexible and adaptable.

Over the next two semesters, NIU is expected to completely move away from on-campus blue-light emergency call boxes and use the university’s NIU SAFE app. Mitchell thinks the pros outweigh the cons in this transition.

“The phone booths have been there for about 25 years; these are outdated technologies,” Mitchell said. “With the SAFE app, you can literally have a call box on your smartphone.”

NIU has less than 5,000 downloads of the app on a campus of more than 16,000 students, according to figures received by the Northern Star in October. Mitchell explained the NIU Police’s goals for publicizing the app to students.

“We work with the Student Government Association,” Mitchell said. “They have partnered with us to help promote the benefits of the app. We also distribute the information on our website and on the various social media we have such as Facebook and Twitter.”

Mitchell said the department is working to post information about the application on the police department’s website and to spread the benefits through social media and other campus organizations.

Mitchell addressed the need for NIU police to work and collaborate with city, county and state law enforcement to help address violent crime near campus. Residents of the Annie Glidden North neighborhood met with Mitchell and DeKalb Police Chief David Byrd at September to discuss the perceived rise in crime in the neighborhood.

“David Byrd has been an incredible partner to work with,” Mitchell said. “We will discuss and develop co-policing strategies to fight crime. We also have a development plan to bring a contract security service to our campus in order to have unarmed and uniformed security.

Mitchell said the department has also increased foot patrols in the area and received positive feedback from residents and NIU members who call the neighborhood home.

In addition to his goals for campus safety, Mitchell discussed his role in NIU police staffing and his goals for hiring and maintaining a diverse police department, which includes adding more women to the NIU police force.

Mitchell was involved in the initiative 30 by 30a nationwide initiative to have 30% of law enforcement positions filled by women by 2030. Mitchell acknowledged that the department lacked female officers and could do better to improve at that position. .

“I will work very hard to increase and encourage our female officers for leadership opportunities and opportunities in the department,” Mitchell said.

Other candidates still to be presented

There will be two more open forums this week for the two remaining finalists. The next forum is scheduled for 1 p.m. Tuesday, with Chicago Police Commander Roderick Robinson in Room Altgeld 315 or via Zoom.

The third candidate for police chief is scheduled for 1 p.m. Thursday in room Altgeld 315. The name of the candidate is expected to be released Tuesday, 48 hours before his visit to campus.