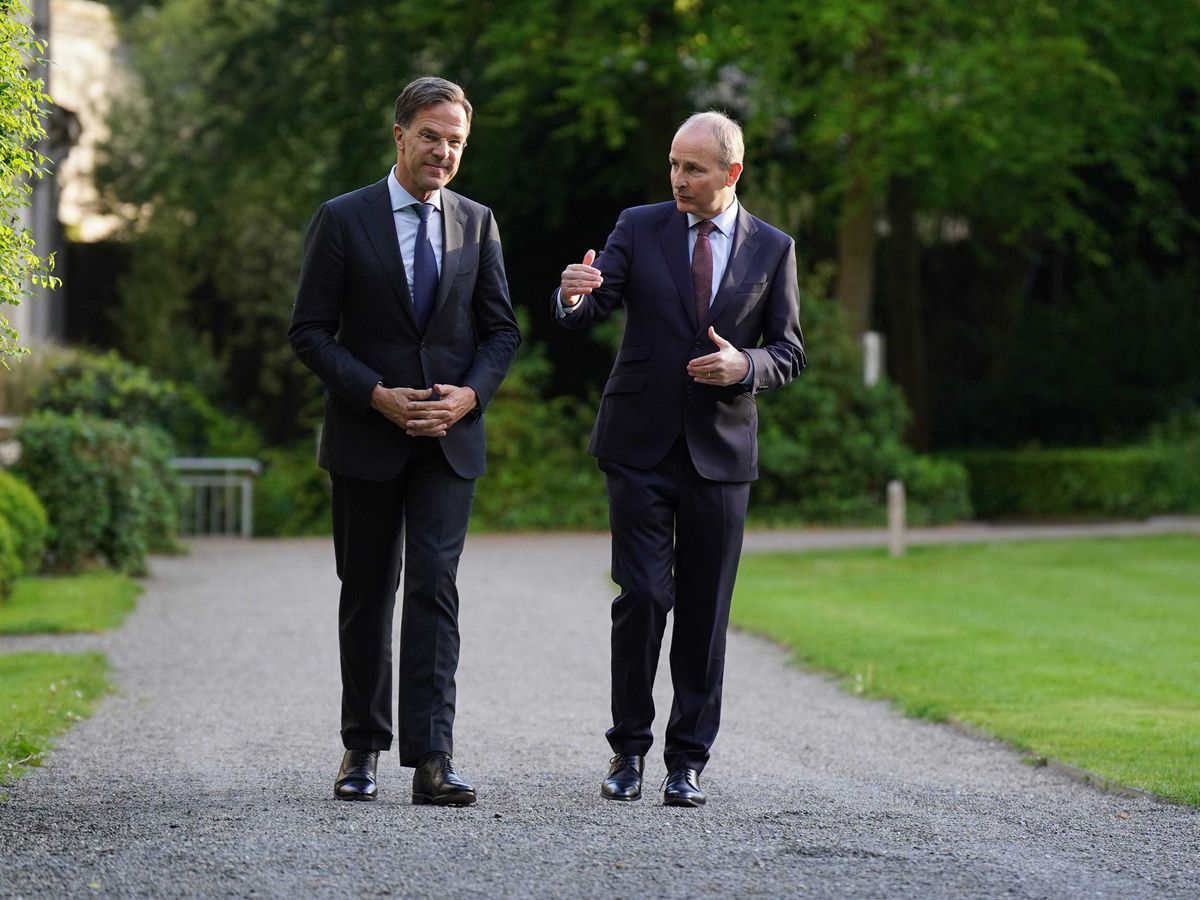 Martin: Deep support for a pragmatic solution on the Northern Ireland Protocol

Irish Prime Minister Micheal Martin said there was ‘deep support from our partners around the world’ for the EU and UK to reach a ‘common and pragmatic solution’ on the Ireland Protocol North.

“Unilateral action will not get us any closer to that goal,” the Taoiseach said on Monday.

Speaking alongside Mark Rutte at a press conference in Dublin, Mr Martin said he had told the Dutch Prime Minister that industry representatives from Northern Ireland had said the protocol was working for “many sectors”, mentioning the manufacturing, meat and dairy industries.

“From my contact over the past few days in Belfast on Friday, with European leaders, with the US Congressional delegation that I met this afternoon, I know that the only way to find a way through the current difficulties on The Protocol is the good faith commitment between the European Union and the United Kingdom.

The EU wants a “harmonious” relationship with the UK, Mr Martin said.

Mr Rutte said he was still ’emotional’ about the signing of the Good Friday Agreement, and that the protocol not only preserved the deal but also prevented a hard border on the island of Ireland while preserving the integrity of the EU single market.

“I think the EU has shown maximum flexibility,” he said, adding that the Netherlands and the other 26 members of the European Union “fully support” the work of the vice-president. from the European Commission, Maros Sefcovic, who negotiated with the UK on how to fine-tune the protocol.

“We will continue to work with him and his team to make sure we find a way out of this,” Mr Rutte said.

“But if that’s not possible, we also need to take our next steps and think about it. I don’t want to guess what they might be because I don’t think it’s helpful, but I think Boris Johnson and the UK know full well what the next steps might be, let’s hope we don’t come to that.

Earlier on Monday, a delegation of US Congress politicians warned the UK government that unilaterally scrapping the protocol “won’t work”.

The bipartisan US delegation met with Mr. Martin on Monday afternoon in Dublin.

The delegation, led by top Democrat Richard Neal, is traveling to Ireland and Northern Ireland this week amid tensions over post-Brexit trade deals.

“It is important, and we underline this, that the (UK government) negotiates and does not take unilateral action,” Mr Kildee told RTE Morning Ireland.

“I think that was the very first point that our delegation pushed, especially Richie Neal.

“The only way to reach an agreement, the only way to protect the incredible progress represented by the Good Friday Agreement, is face-to-face negotiation.

“It is disappointing to see that unilateral action is being considered. We pointed out that this was not the approach we advocated, but again, difficult to determine their motivation.

“We don’t think this is the right way. We believe that unilateral solutions will not work. Face-to-face negotiation to resolve some of these technical issues can be achieved and is what we currently recommend.

He said there was no indication the UK government intended to “change course”.

“The purpose of the meeting was to make sure it was very clear to them what our position is and has been – the position of Speaker Neal, (the Speaker of the United States House of Representatives) Nancy Pelosi and the US government in general argue that we don’t believe this will lead to a positive outcome,” he added.

“We think it’s better, whenever there is a difference, to sit around the table and negotiate towards a common goal.

“It is interesting to see the history we are celebrating when we think of the incredible benefits of the Good Friday Agreement, a very difficult and long-standing dispute resolved through negotiation.

“It’s a lesson that not only should the rest of the world learn, but we hope the parties involved now, the UK government, will recognize that this is the way to resolve these differences.”

The group repeated a warning that there will be no US-UK trade deal if the Good Friday Agreement is damaged by unilateral action.

“It was articulated by the speaker and now that we’ve had Democratic and Republican members of Congress – who disagree on everything, there’s a lot of things we disagree on – but we agree on this point and we made it very clear to everyone we met on this delegation trip,” Mr. Kildee added.

Earlier on Monday, Mr Martin said the only way to resolve the challenges of the protocol is through intensive negotiations between the EU and the UK government.

Mr Martin met political and business leaders in Northern Ireland last week to discuss the effects of the protocol.

“I met with all the political parties on Friday and importantly I also met with industry and the business Brexit task force,” Mr Martin said on Monday.

“They had some interesting research that shows 65% of companies now handle the protocol quite effectively.

“For many sectors like meat production and for manufacturing in the North and for agriculture, like milk, the protocol is actually essential, it is said, and has been very beneficial.

“For other sectors, such as consumer touch areas and retail, there are difficulties and challenges that have been rightfully raised.

“The only way to resolve these challenges is through intensive discussions and negotiations between the European Union and the UK government.”

She then said, “I thanked members of the US Congress for their continued support for the Good Friday Agreement, for peace and for progress in Ireland.

“There would be no agreement without the United States. The progress we have made since 1998 is due to the diligence and commitment of American political leaders who acted as guarantors of our agreements.

“These deals face the challenges of a UK government playing fast and loose with international law and putting the narrow concerns of the Conservative Party above the needs of the people and economy of the North.

“We all agree that the way forward is clear – the DUP must get back to work and stop blocking the formation of an executive.

“Resolution to the implementation of the protocol will be found in negotiations between the EU and the UK government free from threats of unilateral action.”

DUP Economy Minister Gordon Lyons said his party would highlight the difficulties the protocol is causing, in meetings with the US delegation this week.

“So we need to get the message across that protocol doesn’t protect the Good Friday Agreement and that’s why we need this matter addressed quickly.”