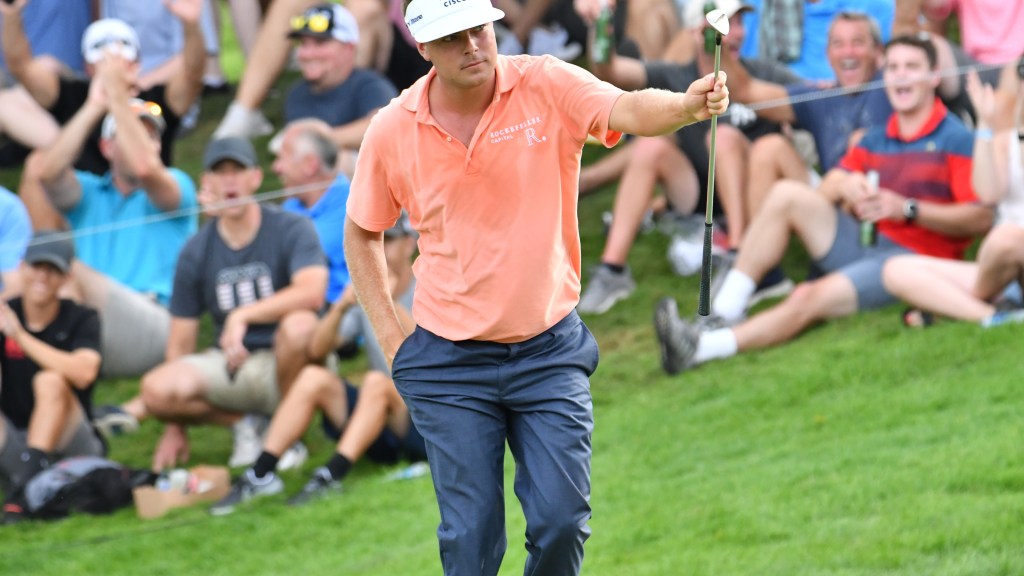 OWINGS MILLS, Md. — Two months ago, Keith Mitchell tied a PGA Tour record by birding seven straight to start his third round of the 3M Open at TPC Twin Cities in Minnesota.

On Monday, he finished his final round at the Northern Trust at Liberty National Golf Club in New Jersey with three straight birdies to move into the top 70 that qualified for this week’s BMW Championship, the second leg of the playoffs in the FedExCup.

So, Mr. Mitchell, what birdie frenzy will stay fresh in your mind for years?

“I would say they’re equally memorable,” Mitchell said Tuesday. “However, this one was more impactful, with all three birdies coming into the stretch. The way I was playing yesterday wasn’t my best golf, and being able to finish with three birdies without having my best gear was something really hard to describe because I relied a lot on my short game yesterday, probably my weakness by report to my driver.

“It’s just overcoming adversity, I would say in my own game, in my own mind, and it’s very different from when you birdie seven in a row, where everything clicks.”

Not much clicked for Mitchell on Monday. Thinking he needed to finish the tournament at 12 under to at least have a chance of qualifying for the BMW Championship, he birdied on the eighth to get to 12 under but then bogeyed on the ninth and 14and hole. Digging deep, Mitchell suddenly found his best form and hit birdie putts from 6, 10 and 17 feet on the last three holes to complete his gigantic jump of 101st at 63rd in the ranking.

“And here we are,” Mitchell said at Caves Valley Golf Club, home of the BMW.

Mitchell didn’t have much time to celebrate; he and his caddy, “Crunchy Pete” Persolja, showered, packed the car, and drove for three hours from Jersey City to the Baltimore area.

“That’s the only option we had,” Mitchell said. “I arrived around 10:00 p.m. last night, tried to get some sleep, then really had to turn and burn and go play 18 holes today. I have never played this golf before. I never saw it. I’m not in pro-am, so this is my only opportunity to prepare for this week.

At least he’s riding an emotional wave of confidence. Winner of the 2019 Honda Classic, where he birdied the 72n/a hole to beat Rickie Fowler and Brooks Koepka in one shot, had a memorable week in the Big Apple.

On Tuesday he teamed up with Harry Higgs to take on Phil Mickelson and Joel Dahmen in a practice round that went viral in social media circles; Mickelson and Dahmen were victorious. That same day, he burst into joy and he toured and rang the bell at the New York Stock Exchange. And then he finished tied for eighth in the Northern Trust with an unforgettable finish.

“Just try to keep the same momentum going,” he said of this week. “Definitely hit a few balls tomorrow, try to fix driver issues, then get used to green gears.

“Once you do that, it’s pretty much just all execution.”