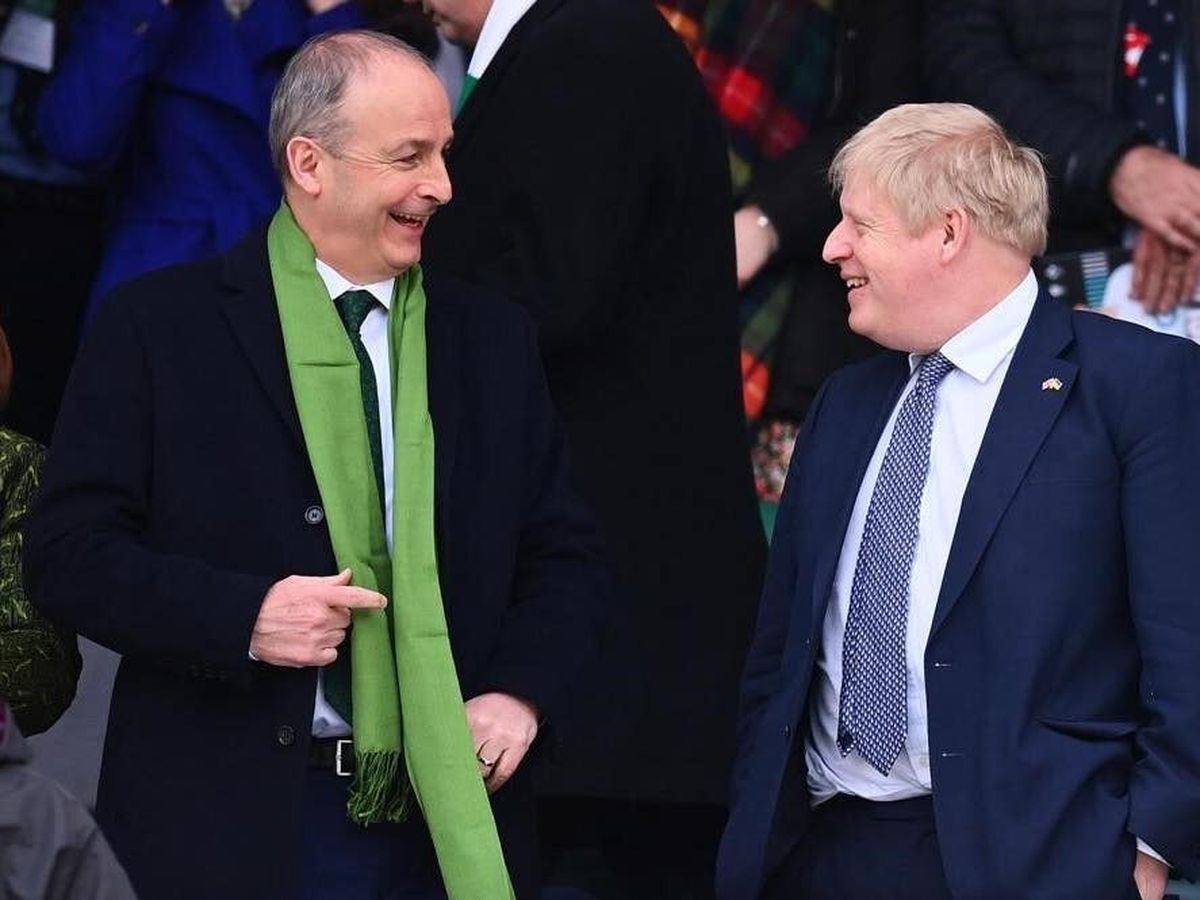 Boris Johnson has told the Prime Minister of Ireland that ‘meaningful changes’ are still needed with Northern Ireland’s controversial protocol – after the Taoiseach said there was growing opinion it was working.

The Prime Minister met Taoiseach Micheal Martin in London where the pair discussed Ukraine and protocol before watching Ireland beat England in the Six Nations at Twickenham.

Mr Johnson told Mr Martin he hoped the “same spirit of cooperation” that the UK and EU shared during the Ukraine crisis could be applied to the Brexit talks.

A Downing Street spokesperson said: “The Prime Minister has reiterated the need for significant changes to the Northern Ireland Protocol in order to protect peace and stability in Northern Ireland and to safeguard the agreement of Belfast (Good Friday) in all its dimensions.

“He said that while greater ambition and flexibility were needed from the EU in the negotiations, he hoped that the same spirit of cooperation that had characterized relations between the UK and the EU with regard to Ukraine could also be applied to solve the problems with the protocol.

A Taoiseach spokesperson said: “The Taoiseach welcomed the continued engagement between the EU and the UK on matters relating to the Northern Ireland Protocol and stressed the importance of finding sustainable and practical solutions for people and businesses in Northern Ireland.”

The protocol created new economic barriers to trade between Northern Ireland and the rest of the UK.

Accepted by the UK and the EU to ensure that the Irish land border is not hardened after Brexit, it has instead moved regulatory and customs controls to the Irish Sea, with Northern Ireland remaining in the single market EU goods.

The region also applies the EU customs code in its ports.

Unionists and loyalists say the arrangements undermined UK sovereignty and demanded the UK trigger the protocol’s Article 16 mechanism to suspend its trade arrangements.

Democratic Unionist Party (DUP) leader Sir Jeffrey Donaldson said on Friday he would not return to the Stormont executive until the protocol issue was settled.

Earlier on Saturday, Mr Martin said everyone he met in Northern Ireland wanted continued access to the EU’s single market.

Mr Martin was asked about the Irish Government’s communication channels with the DUP and the likelihood of the Northern Ireland protocol issue being resolved by the time of the next election.

Speaking to reporters at the Irish Embassy in London, Mr Martin said the Irish government had good communication channels with all parties in Northern Ireland.

“So everyone I met in Northern Ireland all wants to continue to have access to the EU single market. This is a good basic principle to start with. And in my opinion, given the improvement in relations between the UK and the EU thanks to the partnership on Ukraine, I would like to think that in time we will be able to solve this problem.

“But we will take it step by step. And there is a channel between the European Union and the United Kingdom which is in progress and we will proceed step by step.

Sir Jeffrey was applauded at Crossgar Orange Hall on Friday night as he said his party would not reinstate the Stormont executive until the government acted to ‘protect Northern Ireland within the United Kingdom’.

Paul Givan resigned as prime minister earlier this year as part of the DUP’s action against protocol in a move that also removed Deputy Prime Minister Michelle O’Neill from the joint office.