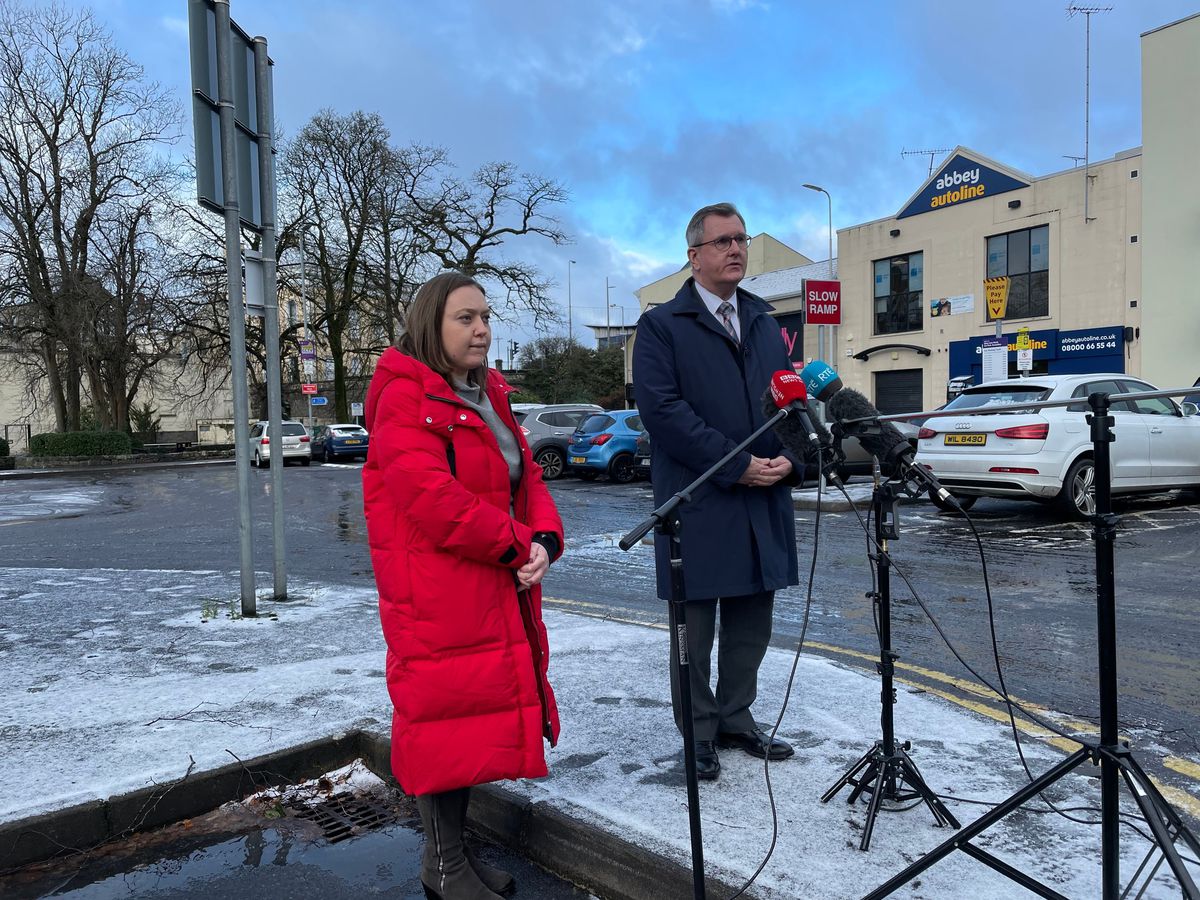 DUP chief Sir Jeffrey Donaldson is expected to have a crucial meeting with Foreign Secretary Liz Truss next week over the Northern Ireland Protocol.

It comes as several months of talks between the UK government and the EU on post-Brexit deals have failed.

Trade unionists are strongly opposed to a series of checks at Northern Ireland’s ports while the region effectively remains within the EU’s single market, in order to avoid a hard border with the Republic of Ireland.

Sir Jeffrey has threatened to remove his party’s ministers from Stormont’s executive if the UK government does not act.

Last year, the UK said the conditions to trigger Article 16 of the protocol, a measure that would effectively unilaterally suspend the treaty agreed between the UK and the EU, were met.

Speaking to reporters in Enniskillen, County Fermanagh on Friday morning, Sir Jeffrey said he had given “time and space” for negotiations, but warned the situation “cannot last indefinitely “.

He said: “Our position has been clear and if an agreement cannot be reached quickly, and I have given time and space for these negotiations, I have suspended the actions that I intended to take. take when I saw the EU and the UK government meeting to negotiate, I tried to give these negotiations time to move forward, but this cannot go on indefinitely.

“We are now six months after the British government command document where they said six months ago that the conditions were met to trigger Article 16,

“And six months later, nothing happened. It is not a sustainable position and if the UK government is not ready to act, I am.

Sir Jeffrey said he would meet Ms Truss early next week, describing him as “very important to me”.

He said this “will help determine the direction in which the government is headed.”

He added: “Is there, as Liz Truss says, still a commitment to trigger Article 16 if an agreement cannot be reached with the EU?”

“This is what she is saying publicly and I want to test it. I want to explore with her what that means, and in particular, what is the deadline for triggering Article 16 if these talks, as they appear at the moment, are not successful? “

Sir Jeffrey has said he wants to see Stormont continue to deliver, but he needs an outcome on the protocol talks.

“I want my ministers to continue working, but I am very clear that we need a result on the protocol in a very short period of time,” he said.

“I know people will say, ‘But you said that in December.’

“I tried to be reasonable, I gave time and space for these negotiations, I waited to see what would happen.

“I’ll talk to Liz Truss and see what she has to say, and then we’ll have to judge whether we think the UK government is going to deliver on the commitment it made to safeguard Northern Ireland’s place in the of the UK domestic market. or not, and if they aren’t, then they’ve dishonored the deal that was the basis upon which Stormont was restored and it’s not a lasting position.

Sir Jeffrey said that in the absence of his party ministers, arrangements would be in place for decisions to be made on key ministerial issues.

“I want departments to be able to keep making these decisions, especially in areas like health and education, so we’re going to plan for that, but we’re also clear that we can’t continue in a situation with an executive which was formed the basis of an agreement which was to protect our place in the UK internal market.

“It has not been delivered and in the absence of delivery on this, we do not believe it is sustainable to continue unless the UK government honors its commitment.”