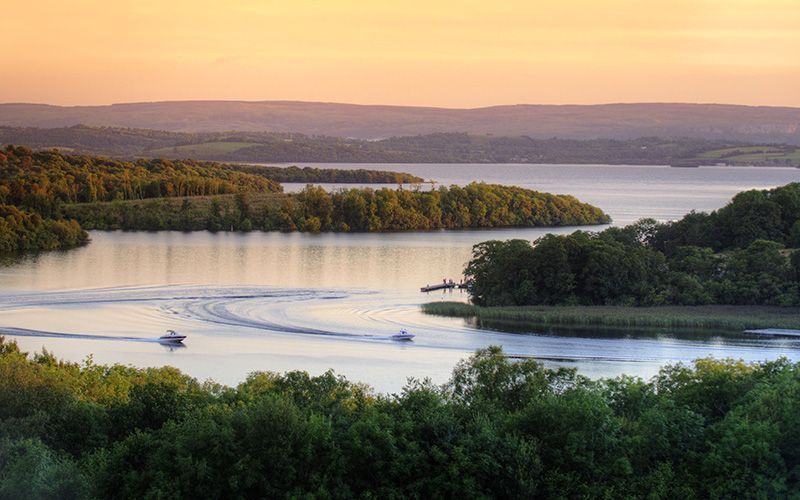 “Whatever you do, hands off the Belleek!” my mom always screamed whenever my siblings and I dared to enter the guest room while growing up. attracting the attention of visitors as they enter the room.

Some 25 years later, I find myself on a lightning expedition to County Fermanagh and the first activity on the route is a visit to the Belleek Pottery Factory, and, needless to say, I immediately remember the my mother’s previous hysteria! However, as I observe the detail and precision put to work by the talented team when creating the delicate ceramics, I finally understand why the matriarch was so thrilled with her vase.

My guide reveals that the original pieces are designed and handcrafted using skills “that have been passed down from generation to generation for over 160 years”. I have also been told that a staggering 100,000 pieces of pottery are produced each year with each item going through 16 pairs of hands to ensure the world famous Belleek standard is met. Otherwise, the junk pile awaits!

Maura, one of the potters, whom we meet as she makes delicate floral decorations that will eventually sit along the edges of a basket, jokes that there is a downside to working for Belleek – her unique skills are often called upon by friends to make cakes for special occasions!

And speaking of special occasions, they are definitely taken care of by Boatyard Distillery which is my next stop. It is located approximately 14 miles east along beautiful Lough Erne. In just three years, this local company has developed a first-rate reputation among hard-to-please gin and vodka connoisseurs. As the drinks flow, founder Joe McGirr describes the business as a family affair, detailing everyone’s involvement not only in the day-to-day running of the business, but also in the design of their premises at the lakeside presented in an inventive way. 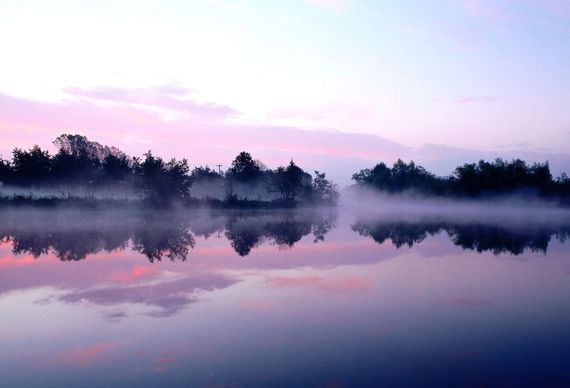 With a background in agriculture, Joe explains that although he has long swapped dairy products for alcohol production, his agricultural roots are very evident in his new ventures – for example, their botanical gin, Sweet Gale, comes from the family bog.

“My grandfather, Brian, was a plow contractor and my father, Michael, was a dairy and beef farmer,” he explains. “It’s great to be able to give something back to the earth now. All of our grain from our spirits goes back to the land and the cows – and we claim the happiest cows in Ireland!

Knee-deep in the gin and tonic, it quickly turns out that it’s not just the cattle that Boatyard Distillery keeps happy! Fortunately, my accommodation for the evening is nearby – the five-star Lough Erne Resort in Enniskillen. Boasting spectacular views over the Fermanagh Lakes, it quickly becomes clear why this hotel was chosen to host the G8 Summit in 2013, welcoming guests such as Barack Obama, Francois Hollande, Angela Merkel, David Cameron and Enda Kenny . I quickly discover that it’s not just political titans who get the star treatment – even mere mortals like yours.

After checking in, I resist the temptation to channel my indoor Nick Faldo or Rory McIlroy on the two championship golf courses and, instead, ditch my bags in my room before relaxing in the Thai spa at the complex, using the thermal suite and the infinity pool, the perfect place to whet your appetite.

That evening, I dine at their Catalina restaurant and let the charming Noel McMeel amaze me with his culinary expertise. Similar to Joe McGirr from the shipyard, McMeel – who won the 2018 Ulster Best Chef award – grew up on a dairy farm and tells me that “my mother’s traditional cooking has influenced my menus.” He is constantly inspired by recipes he learned from her in his youth.

The next morning I find myself in hiding – and not just because of the excess weight I carry following a hearty breakfast at the hotel! The Marble Arch Caves are one of the most beautiful exhibition caves in Europe, first explored in 1895 by Frenchman Edouard Alfred Martel, accompanied by Dublin-born scientist Lyster Jameson. The intrepid pioneers were, of course, astonished by what they discovered. I venture into this fascinating and natural underground world of rivers, winding passages and upper chambers, I too remain speechless. 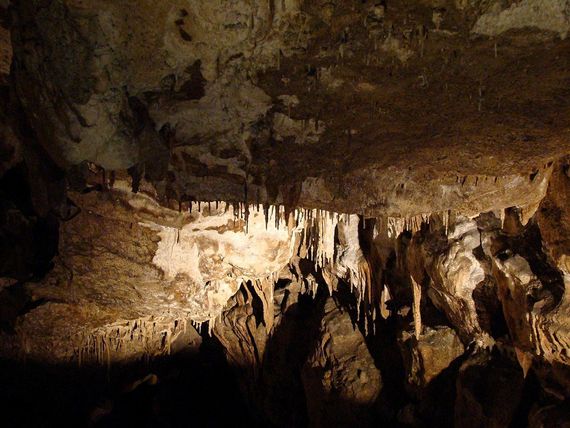 The caves of the marble arch.

The exciting tour includes a boat ride through huge caverns, reminding me, once again, of my childhood days and those many times I dreamed of being Indiana Jones or a character in the Goonies.

Indeed, my school days are remembered again – especially geography lessons – as we navigate the stalactites and stalagmites, and I laugh at hearing several of the nicknames given by locals to some of the underground features including ” the elephant “,” the porridge “and the” singing frog and his microphone “!

Outdoors, I acclimatize to the natural daylight as I explore nearby Cladagh Glen which surrounds the caves – its cascading waterfall being particularly Instagram-friendly. For those looking for a slightly more demanding hike for trotters, try the secluded but beautiful Cuilcagh Legnabrocky Trail – the starting point is a short drive from the Marble Arch Caves. If you persevere to the end, you’ll be greeted by the now famous boardwalk, known locally as the Stairway to Heaven, which helps walkers to the top of the mountain.

The natural landscape of Fermanagh is also well highlighted in the grounds of Florence’s magnificent Georgian courtyard. The exquisite property is the perfect location for history buffs and, in particular, nature lovers thanks to the lush forests and pretty gardens, which are largely tended by green-fingered volunteers.

Currently, under National Trust control, Florence Court was built in the 18th century by the Cole family – powerful but romantic landowners as Sir John Cole named the property after his wife, Florence Bourchier Wray. In a fitting tribute to his romantic origins, a wedding takes place during my visit. So instead I go to another area also brilliantly preserved by the Trust – Castle Coole, one of Ireland’s finest examples of neo-classical houses.

Recognizable from the recent film version of Miss Julie of Strindberg, starring Jessica Chastain and our own Colin Farrell, the palace was built by the first Earl of Belmore, a politician who by all accounts was not not particularly good at handling money as construction went over budget – several times – resulting in long-lasting family bankruptcy that only ended when the estate was finally taken over by the trust in the 20th century.

During the 90-minute tour, my senses are treated with a feast of gorgeous settings and furnishings, including ornate plaster ceilings by Joseph Rose, the living room piano – which would be priceless – and the extravagant State bed, which was originally commissioned, in 1821, by the Second Earl of Belmore for the visit of George IV. How maddening to everyone involved that the ill-bred monarch never made it to the end, though it may be heartwarming to find that the ornate decoration has remained in perfect condition as a result.

Desperately in need of food after such an active day indoors, outdoors – and underground – I make my way to the four-star Killyhevlin Lakeside Hotel, which has stunning views over Lough Erne. Kove, his fine dining restaurant, is considered one of the best restaurants in Enniskillen – a claim that certainly has merit if my delicious four course meal and excellent service is something to do. As I let the spicy duck fillet digest, I am mesmerized by the boats plying the lake outside as the sunset looms on the horizon.

The next day I have the opportunity to venture out on the water thanks to Erne Boat Hire, a family business located on the Regal Pass pier in Enniskillen. Their “little red boats” are specially designed for the rental market and extremely easy to use. Plans to visit the popular Devenish Island monastic site are dropped due to some ominous clouds hovering overhead; instead, the charming Mark Pancott, the founder of the company, takes me on a jaunt around the island of Enniskillen. 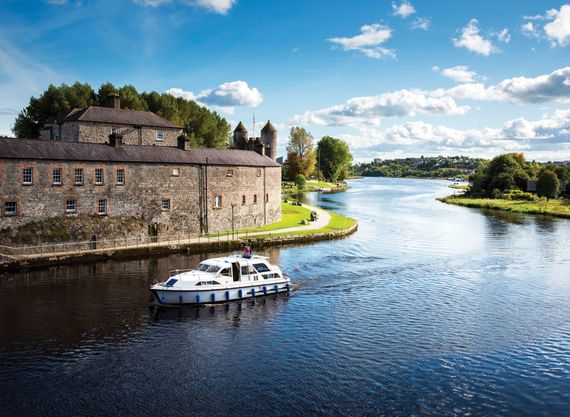 Mark recounts the “amazing support” the company received from Waterways Ireland as we indulge in some birding time and enjoy great views of some of the city’s main landmarks, such as the castle.

But that’s another castle that marks the end of my visit to beautiful Fermanagh – Belle Isle Castle from Lisbellaw. Originally built as a house in the early 17th century, the Picture Book property has since been completely renovated and is now available to rent for private functions, such as corporate events or weddings. In fact, during my visit the property just hosted an 80th anniversary celebration and I learn that after the candles went out on the cake the night before, guests were part of a mysterious mystery murder.

One thing is for sure, you don’t need to have the mental dexterity of Poirot or Mrs. Marple to deduce that magical County Fermanagh has an embarrassment of riches at its disposal – both natural and man-made – and a visit should be a priority for everyone. itinerary.

(Just make sure you don’t break your Belleek vase on your trip home!)