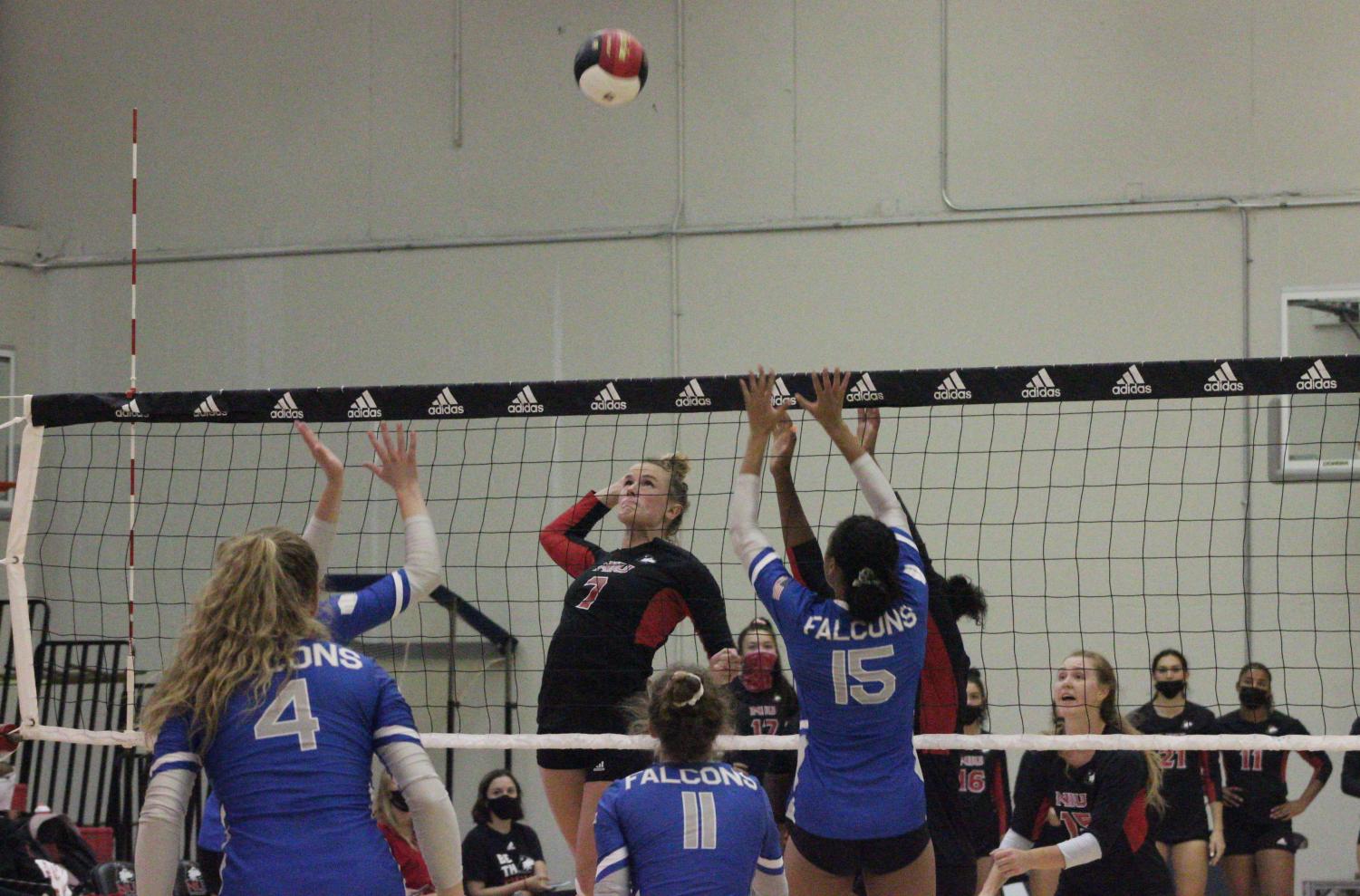 At 9-10 after the midpoint of the season, the Huskies must find their rhythm now to fight for a conference title

Senior setter Grace Balensiefer aims for a spike against the Air Force on Aug. 28. Balensiefer is averaging 10.8 assists per set this season.

The NIU volleyball team is halfway through its season and is right in the mix to compete for the Mid-American Conference Championship, but a strong finish to the season is just what it needs.

Midway through the season, the Huskies are 9-10 with a 3-6 conference record on the season. It’s been a very hectic season for the Huskies, but they hope to overcome the difficulty and end their season strong with nine games remaining on the regular season schedule.

It’s been an inconsistent season for the Huskies to say the least, their longest winning streak being four games, while their longest losing streak has been three games.

The Huskies have led the way this season with players such as junior outside hitter Katie Jablonski who leads the team with 231 kills, followed by freshman middle tackle Charli Atiemo who has 181 kills this season.

It’s senior setter Grace Balensiefer who places the ball for players like Jablonski and Atiemo. Balensiefer has 769 assists this season and recently became just the fifth NIU passer to reach 3,500 career assists. Those three will play a big part in getting a few wins to end the Huskies season.

Head coach Ray Gooden, in his 20th year, knows what it will take for these 2021 Huskies to end the season on a high note the way they want.

Conference play is what the Huskies will see for the remaining portion of their schedule. Winning the majority of the rest of the Huskies’ nine games will be huge for them in the standings. There’s not much room for error for NIU throughout the season, so the pressure is on.

Consistency has been the struggle for the Huskies, but there’s still a lot to play for. Halfway through the season would be the best time for this team to break through, catch fire, and be consistent the rest of the way.

Seven of the Huskies’ last nine games will be at home, so hopefully the fan support will be the boost NIU needs to win future conference games.

The Huskies’ next game against Toledo is Friday at 6 p.m. at Victor E. Court.

2021-10-21
Previous Post: Editorial: Sports Media Does Not Cover Systemic Issues
Next Post: Gooden looks back on 20 years at NIU