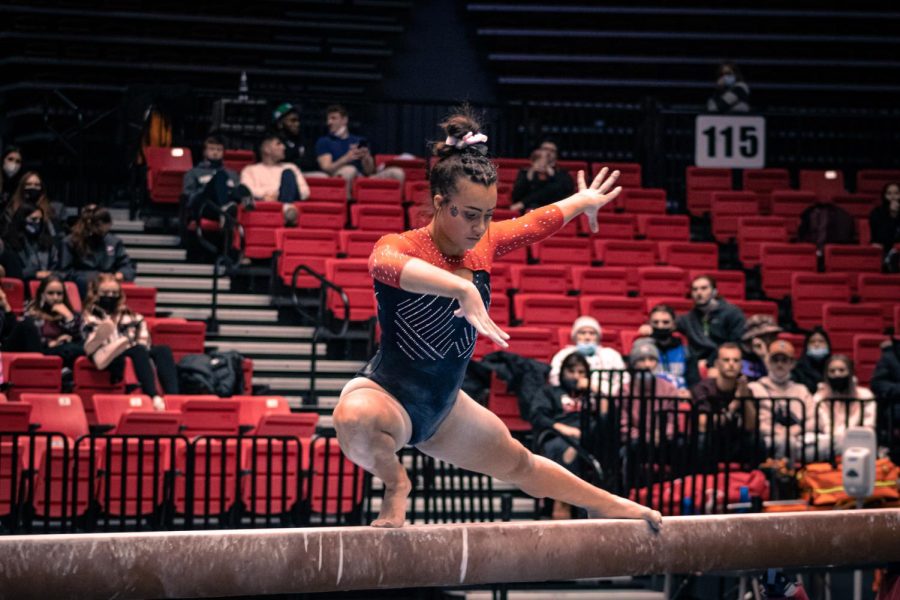 Senior Morgan Hooper performs on balance beam during the third rotation of the NIU Tri-Meet Feb. 4 at the Convocation Center in DeKalb. Hooper competed in all four events of the competition, with her best performance coming in floor exercises with a score of 9.875.

A basketball coach rotates with his players. A baseball coach practices batting with his team. A gymnastics trainer… lands his bars during practice?

Gymnastics is one of the most difficult and technical sports in which athletes are tasked with contorting their bodies as they fly through the air. While most sports allow a coach to get in on the action with their players at some point, gymnastics is an entirely different beast.

Women’s gymnastics head coach Sam Morreale, in his 11th year leading the team, has led the Huskies into a new era of success in NIU gymnastics.

“I started as a club coach,” Morreale said. “Then I worked at a local gym in town. I spent 20 years there learning the trade, then I volunteered for four years at NIU, then assistant, then in the position of head coach.

Since joining NIU, Morreale has instilled a winning culture in the team, which led to NIU winning the MAC Championship in 2019, as well as earning WCGA Academic All-American status as the No. 1 in the nation.

But how does he control his team? How does he make sure his gymnasts improve without being able to do it with them?

“It’s all relative,” Morreale said. “At this level there are different stressors than maybe as a club coach where you do more of the basics of the skills that we are trying to do now, whereas now the kids have already done that. , so now it’s just tweaking things. Plus it’s the day-to-day planning of the peaks of the season. How much we want to load on them. Every day can’t be the same, so you try to change and put different stressors on the kids.

Gymnastics can be a very dangerous sport where an injury can occur at any time due to a bad landing, a missed point or a frightening fall. This is why the coach ensures that the team evolves towards a management style as the season progresses.

“The objective is that at this stage of the season we have given up on difficult training tasks and focused more on managing the team,” Morreale said. “Managing the season, injuries, illnesses, missing people. There are different pieces in the puzzle.

Everything happens so quickly during competitions that it is difficult for a coach to keep track of every correction that needs to be made. That’s why Morreale has an ace up his sleeve which has helped his team immensely.

“We have video systems in place that film whatever they’re directed at,” Morreale said. “We can go back and revisit things while filming. So it’s super useful because you can look at it and say to yourself “you have to do this correction”. They’re going to watch it, put those two things together, and their next turn, they try.

As everyone knows, a coach cannot do everything alone. That’s why Morreale has plenty of help to make sure everything goes smoothly.

“As a head coach, I stick my nose in everywhere, but I’m mainly the vault, bar and floor coach,” Morreale said. “Then Chris (Weiss) as an assistant will help me on the bar but he has a good eye where he can hold on to the vault and make corrections there. Same with the floor. Nita (Teague) does a bit of everything our beam but then she can help out on the field and at different events Nita and I have been training together for a long time She has a sort of developmental background and that helps us the most being able to start a skill from start to finish Although we never necessarily have to do this, we can go up the chain where we think we can make a change to make it better.

Although Morreale won’t be going up to the balance beam to show his gymnasts how to perform a proper dismount, you can be sure he has everything in place to ensure they receive the best training to compete at the highest level.