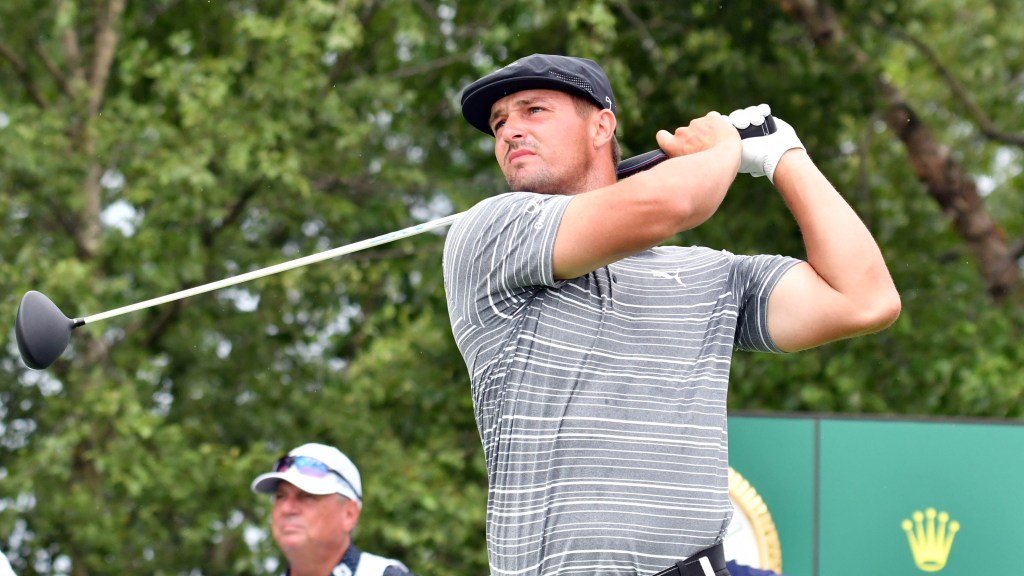 JERSEY CITY, NJ — For those keeping the tally — admittedly a less onerous task than charting his 44 strokes on the final nine holes of the US Open — Friday marked the sixth straight round after which Bryson DeChambeau refused to speak to the media on hold. His quiet snit goes back to the WGC FedEx St. Jude Invitational two weeks ago, when DeChambeau casually told reporters he didn’t need the COVID-19 vaccine because he was healthy and he wouldn’t get vaccinated by someone more needy, ignorance which suggested he reads the news with much less intensity than his distance book.

Faced with the backlash over his vaccine comments, the world No. 6 opted for silence, not even wanting to list his Friday 65 at the Northern Trust at Liberty National. It is his prerogative, of course. There’s enough going on in the world that only the most observant sports fan will miss the usual dose of pseudo-scientific bunkum.

DeChambeau’s mistrust of the press — and this being a golf media outlet, it’s not exactly Woodward and Bernstein he’s avoiding — involves one of two things. Either he thinks the media is treating him unfairly or he doesn’t trust himself to navigate a simple interview session without stepping on another landmine. Either way, stiff-armed reporters have been the one constant feature of its tumultuous summer.

DeChambeau had fans kicked out of the Memorial Tournament for the seemingly serious offense of calling him “Brooksie,” which only served to inspire copycat rowdies who still follow him. That back-nine implosion at the US Open took him from leading to a T-26 finish, but he tersely insisted it was due to nothing more than “bad luck”. At the Rocket Mortgage Classic in Detroit, his caddy quit just before the first round, forcing DeChambeau to decline media requests for the rest of the week, despite being both the defending champion and a Rocket Mortgage sponsor.

Bryson DeChambeau leaves the ninth green after completing his second round of the Rocket Mortgage Classic at the Detroit Golf Club in Detroit on Friday, July 2, 2021. (Detroit Free Press)

It was just his month of June.

At The Open Championship, DeChambeau angrily denied that he doesn’t shout a warning when his tee shots rain down on unconscious spectators in the gallery, despite ample evidence that he does so regularly. After a mediocre opening round at Royal St. George’s, he said his driver “sucks”, a petulant whine that led his equipment sponsor, Cobra Puma, to publicly compare him to an 8-year-old. He later had to pull out of the US Olympic team after testing positive for COVID-19.

It was his month of July. August brought vaccine chatter and even more sulking with the press, and the month still has 11 days to go. All of this to a soundtrack from his ongoing social media scrapbook with Brooks Koepka.

It’s exhausting just following DeChambeau’s endless tribulations, so one can only guess how nerve-racking it must be to experience them. Unless, that is, he is so devoid of self-awareness and managerial orientation that he can entirely attribute negative coverage to biased media without ever blaming his own conduct.

Perhaps DeChambeau sought advice from an experienced hand in these areas last weekend when he was a guest of former President Donald Trump at his golf club in Bedminster, New Jersey. He didn’t have his agent, Brett Falkoff, on hand Friday at Liberty National to offer expert advice. Around the time DeChambeau signed his card, Falkoff was scheduled to play in the second round of the Anderson Memorial, an amateur tag team event held at Winged Foot, where his boss won the US Open last year. Falkoff joins forces with Andrew Giuliani, the lazy scion of a disgraced former New York mayor, whose own ersatz campaign for New York governor failed to win the support of a single Republican leader. in the state. (The pair opened with 73 tied for 52nd out of 58 teams, far from qualifying for the match-play portion of the event, so Falkoff could be in attendance Saturday to guide his charge.)

These FedEx Cup playoffs are a perfect opportunity for DeChambeau to press a reset button on his season, make his case for Player of the Year honors, a conversation he dropped when the trophy most important he held moved onto Jon Rahm’s chimney as he failed to land a single top 25 in the majors. Ranked 7th in the FedEx Cup standings, he is effectively guaranteed to be able to collect the $15 million bonus in the final in two weeks.

If he wins at East Lake, who will DeChambeau recite his usual long list of sponsors deserving of thanks to? Will he then agree to meet the press since there could be a product that needs to be pimped? For now, however, he seems to regard members of the media as the wretched scum of the teeming shoreline of Liberty National, to borrow the words of Emma Lazarus inscribed beneath that other mute, stiff-armed American icon that hovers over Liberty National this week.