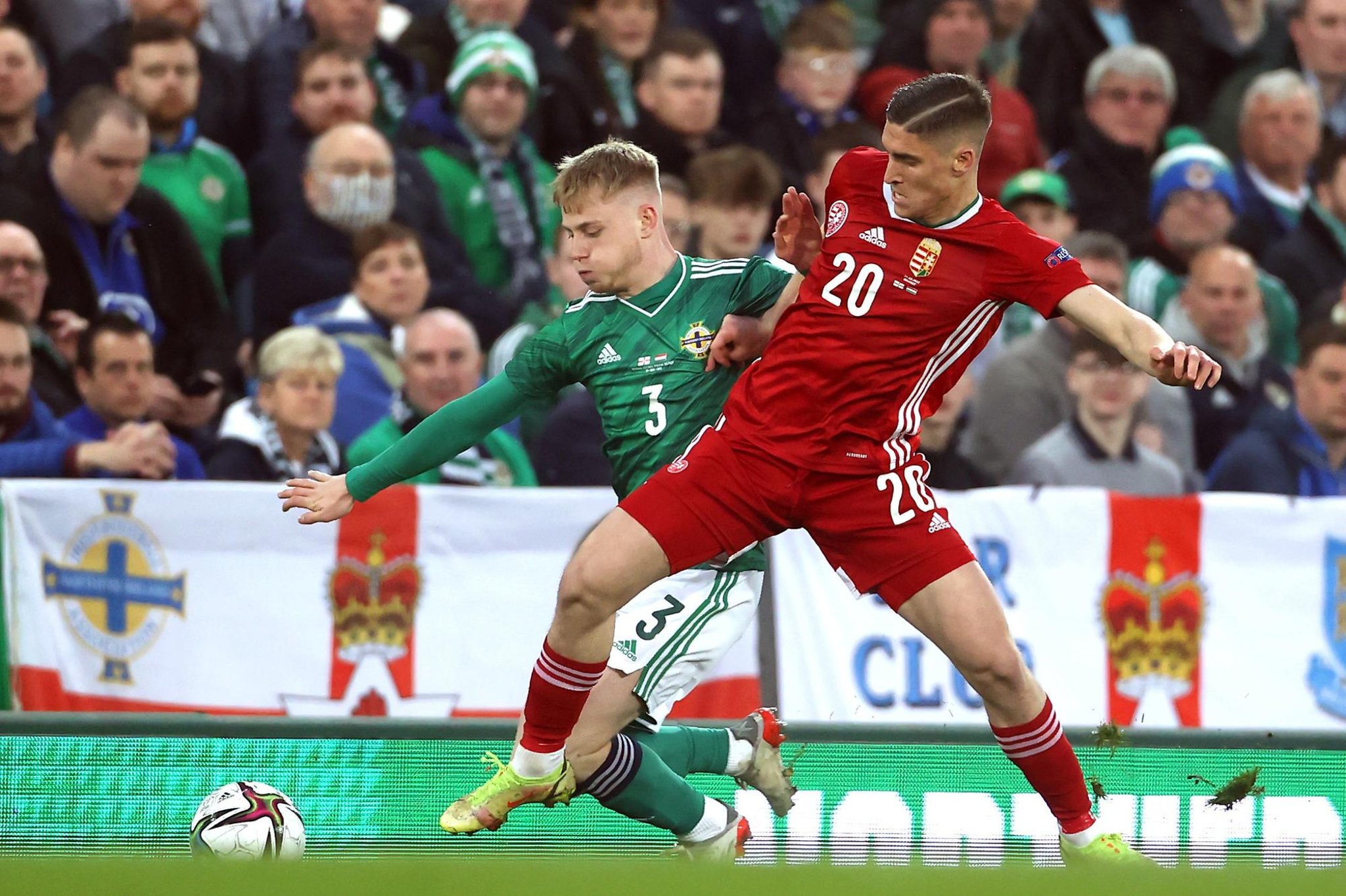 The winger, who has been a star for Stephen Crainey’s side this season, made his international bow to his home fans in a packed Windsor Park.

Sadly, Northern Ireland couldn’t register a win to make it a night to remember for the 21-year-old, but he performed well and certainly didn’t look out of place.

Elsewhere, Blackpool’s Shayne Lavery had to settle for a place on the bench after playing over an hour in last week’s 3-1 win over Luxembourg – but came on midway through the second half .

Oxford United’s Gavin Whyte, the man who replaced Lavery in the starting line-up, squandered a good early chance, losing his footing at the wrong time as space opened up for him 18 yards from goal.

Only the woodwork prevented the hosts from going past when skipper Steven Davis, on his 134th cap, hit the outside of the post with an exquisite effort with the outside of his left foot.

Fleetwood’s Paddy Lane made his senior debut for Northern Ireland

At the other end, Ballard received a round of enthusiastic applause from the home fans after foiling a dangerous counter with some fine defensive work.

Former Blackpool recruitment manager Tommy Johnson, who now works as an assistant to Ian Baraclough after leaving the Seasiders in July last year, barked instructions from the touchline.

Relations with Blackpool continued as Cathcart was shown a yellow card for a crisp challenge on Loic Nego, of whom he may have few complaints.

The visitors offered very little in the first half but threatened when they worked a good opener for Roland Sallai, whose low drive was saved well by Bailey Peacock-Farrell.

The best chances came for the hosts, however, who came close at half-time when Niall McGinn was denied by a mid-air save after Josh Magennis and Whyte linked up well.

Baraclough opted to bring Dion Charles off the bench in the interval, rather than Lavery, and the former pool youngster was straight into the action, rushing to goal before appearing to be pulled by the last man – only to that the referee ignores the appeals.

Lane nearly made it his first memory when a cross from the left wing almost inadvertently sailed over the goalkeeper’s head, only to settle on the roof of the net instead.

Unfortunately for Northern Ireland, all their good work was undone when Hungary took advantage of a poor backpass from Niall McGinn, which ended with Sallai rounding the keeper and tucking into the empty net.

Five minutes after the deadlock was broken, Lane’s night came to an end when he was replaced by Ballard’s Millwall team-mate George Saville.

The change was quickly followed by the introduction of Lavery, who had just over 20 minutes to grab a second international goal. Former Seasider Jordan Thompson has also entered the fray.

Within 60 seconds, Lavery shut down the Hungarian defenders and forced them into hasty clearances.

Northern Ireland grew increasingly desperate in the closing stages, with Ballard appealing for a late penalty hoping more than expected – but the referee was uninterested.

Lavery nearly pulled his side level with eight minutes remaining when he ran across his marker with a signature post run to peek just wide of goal.

Baraclough’s side, who deserved at least a bare minimum draw, squandered two more presentable chances in the dying minutes.

First, Saville’s close-range header was superbly repelled by the keeper before debutant Trai Hume forced another stellar save from the man between the sticks from Lavery’s cross.

The 23-year-old was again involved in the dying seconds of stoppage time, as he saw a close-range effort charged before Charles was denied by the keeper on the rebound – which turned out be the last action of the night.

Elsewhere on international duty, Kenny Dougall was an unused substitute for the second game of the rotation as Australia completed their qualifying group with a 1-0 loss to Saudi Arabia.

The Socceroos now face a play-off against the United Arab Emirates and, if they win, they will then have to overtake the team that finishes fifth in the South American group to reach this winter’s World Cup in Qatar.