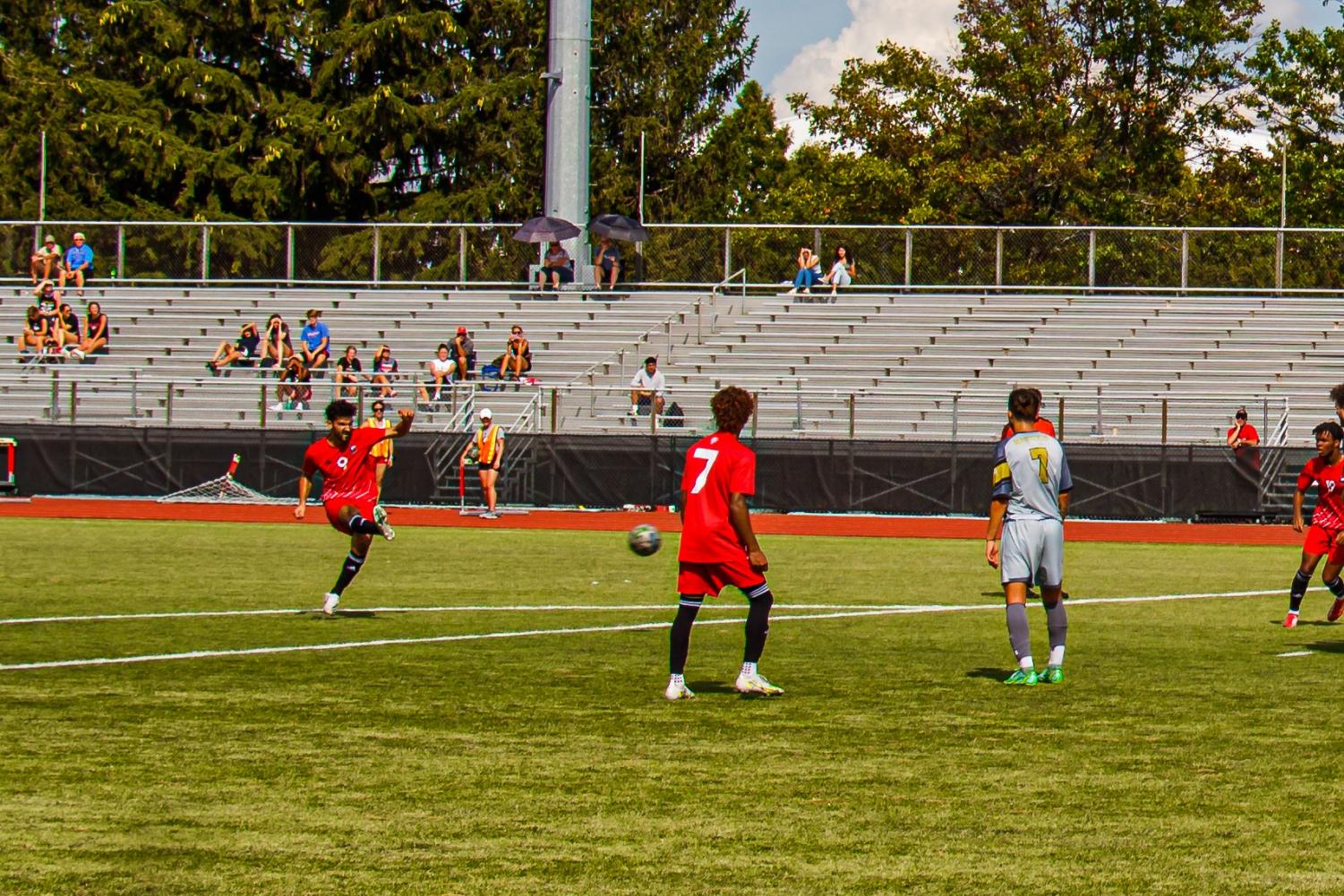 Junior Redshirt forward Enrique Banuelos delivers a 72nd-minute free kick against Purdue Fort Wayne on August 26. The goal that followed was decisive for a 1-0 victory.

In the 72nd minute, a foul by Purdue Fort Wayne red jersey junior midfielder Michael Teller was yellow carded and gave NIU a free kick. Banuelos, who replaced the game at half-time, shot and found the upper right corner of the net. It was the fifth goal of Banuelos’ college career.

Banuelos said he got an assist in recognition from his teammates, the brothers of senior defender Anthony Markanich and senior striker Nick Markanich.

“I was talking to the twins, and we saw there was a gap on both sides of the goal,” Banuelos said. “We thought it was the best option because the goalie was cheating in the middle, so we decided to go to the sides.

NIU possessed the ball for much of the contest, preventing the Mastodons from getting many possessions or shots. On the other side, however, head coach Ryan Swan has said he wants to see his forwards improve.

“The priority is obviously to get the win, so I’m glad we did,” said Swan. “For the amount of the ball we had, it probably should have been more comfortable than it was. We have things that I’m sure we can work on. I was happy with our ball retention; we We moved the ball well and we just weren’t so sharp in the final third.

Banuelos has said he expects his fellow attackers to find a rhythm as the season progresses. The Mexico City native also noted the battle the two teams had with the 88-degree heat.

“It was definitely a challenge today,” Banuelos said. “The temperature was really hot so both teams had to really push. We had heavy legs towards the end, but I think we were able to take some good positions. We were attacking in numbers and we were just able to connect more. “

The Huskies were the attackers in the first half, hitting 10 shots over Purdue Fort Wayne. Still, the game was tied without a goal at half-time.

Following Banuelos’ goal, Purdue Fort Wayne was able to put pressure on the Huskies with a shot from red-shirt second-year midfielder Ali Nasser. Redshirt junior goalie Martin Sanchez made the second save of the day.

Banuelos managed three shots on goal, including another late free kick that crossed the net. Nick Markanich led the team with eight shots.

The Huskies are now preparing for a road trip Monday in South Bend, Indiana, to face the Fighting Irish at the University of Notre Dame. Kick-off is scheduled for 6 p.m.